From the Bookshelves: American Immigration After 1996: The Shifting Ground of Political Inclusion by Kathleen R. Arnold 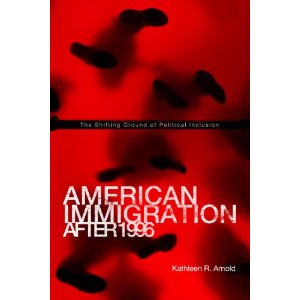 American Immigration After 1996: The Shifting Ground of Political Inclusion By Kathleen R. Arnold

Few topics generate as much heated public debate in the United States today as immigration across our southern border. Two positions have been staked out, one favoring the expansion of guest-worker programs and focusing on the economic benefits of immigration, and the other proposing greater physical and other barriers to entry and focusing more on the perceived threat to national security from immigration. Both sides of this debate, however, rely in their arguments on preconceived notions and unexamined assumptions about assimilation, national identity, economic participation, legality, political loyalty, and gender roles.

In American Immigration After 1996, Kathleen Arnold aims to reveal more of the underlying complexities of immigration and, in particular, to cast light on the relationship between globalization of the economy and issues of political sovereignty, especially what she calls “prerogative power” as it is exercised by the U.S. government.

Kathleen R. Arnold is currently Visiting Professor at DePaul University in Chicago. She is the author of America's New Working Class: Race, Gender, and Ethnicity in a Biopolitical Age (Penn State, 2007).

Listed below are links to weblogs that reference From the Bookshelves: American Immigration After 1996: The Shifting Ground of Political Inclusion by Kathleen R. Arnold: