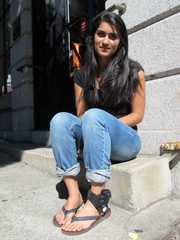 Yesterday, Mandeep Chahal, a pre-med honor student at UC Davis, and her mother faced imminent deportation to India early today.  The U.S. government has given them a reprieve and granted a stay of deportation.

A national campaign by America's Voice collected over 3,000 signatures on a petition asking the Obama administration to halt the deportation of the undocumented student who came to the United States at age 6 and was voted "Most Likely to Save The World" at Los Altos High School.   Read more (and here and here)on the case.

News outlets have reported that Mandeep has spent two years at UC Davis, where she's studying to be a doctor "so she can remediate suffering in the Third World," according to her high school history teacher. She served as president of her high school Amnesty International chapter and has helped a nonprofit, One Dollar for Life, raise money from students across the country to build a dozen Third World schools. Chahal and her mom fled Punjab in 1997, where Kaur had been persecuted for being politically active. They entered the United States to join Chahal's dad, a legal U.S. resident, and Mandeep's mother applied for asylum. The case has dragged on for more than six years.

Fortunately, Mandeep's story appears to have had a happy ending -- at least for now.  Her case, however, demonstrates the need for Congress to pass the DREAM Act as well as to enact immigration reform.  And it raises many questions about the current focus on immigration enforcement in the United States.

Why on earth would we want to deport a college honors student -- and graduate of one of our public high schools -- who, by all appearances, would be a contributing member of American society (and the economy)?

How can we as a nation put Mandeep and her family through this frightening ordeal with the threat of removal from the only country that she really knows hanging over her due to no fault of her own?  Recall that Mandeep was brought her at age 6.

This is precisely the kind of case that Immigration & Custom Enforcement Director John Morton last week has said should be low priority for removals.  Aren't there better uses of our enforcement resources than trying to deport Mandeep and her mother?

Listed below are links to weblogs that reference UC Davis Honors Student Gets Reprieve: