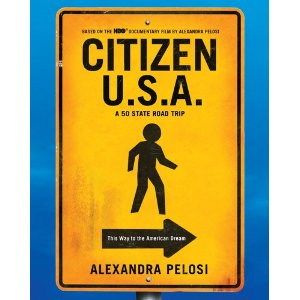 HBO will premiere Citizen U.S.A.:  A 50-State Road Trip on July 4.  The documentary follows Alexandra Pelosi, daughter of former Speaker of the House Nancy Pelosi, as she travels across the United States to attend naturalization ceremonies in all 50 states and meets new citizens to find out why they chose America as their home.  Here is a synopsis of the film.

There is a companion book to the documentary.

Pelosi talked about her film on The Colbert Report earlier this week.

Listed below are links to weblogs that reference Citizen U.S.A.: A Documentary by Alexandra Pelosi: