The L.A. Times reports that U.S. Rep. Duncan Hunter (R-California) "disagrees with the Navy's decision to name a cargo ship under construction in San Diego for California farm labor leader Cesar Chavez." (emphasis added).  Here is Hunter's statement objecting to the naming, which is posted on his congressional website.

Upon reading the article, my first thought was to wonder why the Navy had attached Chavez's name to a cargo ship, not one of its gamarous aircraft carriers.  Admittedly, I may have aircraft carriers on my mind since I was just reading about the 25th anniversary of the popular film "Top Gun."

A cargo ship seems particularly unglamorous for a civil rights hero such as Chávez.  It does seem to fit well with the stereotype of persons of Mexican ancestry as good for little more than hard (stoop) labor. 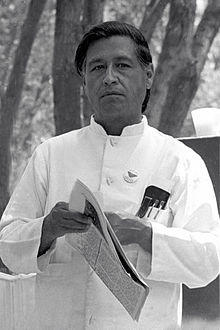 The commenters on the L.A. Times website did not share my concerns.  Rather, they wanted to invoke other stereotypes about Latinos in criticizing the Navy's decision to honor César Chávez.  Here are a couple of examples:

"This is an example of political correctness run amuck. [SIC] I'm waiting for Obama to name the next aircraft carrier the SS Che Guevara!"

Listed below are links to weblogs that reference Rep. Duncan Hunter criticizes Navy's decision to name ship for César Chávez :