Former Attorney General Alberto Gonzales: "I am disappointed that I didn't do things differently" 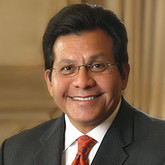 The BLT Blog:  The Blog of Legal Times reports that former Attorney General Alberto Gonzales, now at Texas Tech, has said that "I am disappointed that I didn't do things differently" to stop the politicization of the system of hiring career Justice Department attorneys through its honors program during his time in office.

As ImmigrationProf reported at the time, the Justice Department during Gonzales's tenure allegedly engaged in politically-based hiring for, among other positions, immigration judges and Board of Immigration Appeals members.

Listed below are links to weblogs that reference Former Attorney General Alberto Gonzales: "I am disappointed that I didn't do things differently" :