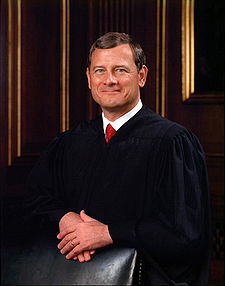 The Supreme Court today affirmed the Ninth Circuit's decision in CHAMBER OF COMMERCE OF THE UNITED STATES OF AMERICA ET AL. v. WHITING.  The Court, in an opinion written by the Chief Justice, held that the Arizona law stripping buiness that employers of undocumented immigrants of licenses, is not to be preempted by federal immigration law.   Download Chamber of commerce

My initial reading of the decision is that it is relatively narrow in scope on the question of federal premption of state regulation of immigration (and thus should not be read too broadly with respect to the prospects of other state laws, including Arizona's S.B. 1070).  The Immigration Reform and Control Act (8 U.S.C. § 1324a(h)(2)) expressly preempts

"any State or local law imposing civil or criminal sanctions (other than through licensing and similar laws) upon those who employ, or recruit, or refer for a fee for employment, unauthorized aliens." (emphasis added).

The Court held that the Arizona Legal Arizona Workers Act provision that penalized employers of undocumented immigrants with up to loss of a business license, fell withing the language of the savings clause and thus was not prempted by federal law.  A majority also found that there was nothing in federal law that barred a state, as Arizona did, from making use of the federal E-Verify system mandatory.

Debra Cassens Weiss of the ABA Journal noted that

"A word search of Roberts’ majority opinion reveals he did not use the term `illegal immigrants' or `illegal aliens,' except when quoting other sources. Instead he opted for the more politically correct terms `unauthorized aliens' and `unauthorized workers.' At oral arguments, word choice became something of an issue when Justice Sonia Sotomayor was the only justice who shunned the `illegal immigrants` terminology, referring instead to `undocumented immigrants.'"

It is noteworthy that Justice Sotomayor in her first opinion on the Court had thd opportunity to address this immigration terminological question.

One could say that the Chief Justice was using, as a lawyer should, the more technically accurate term rather than the "poolitically correct" one.

Lyle Denniston's analysis of the opinion appears on SCOTUSblog.

Listed below are links to weblogs that reference BREAKING NEWS: Supremes Decide CHAMBER OF COMMERCE OF THE UNITED STATES OF AMERICA ET AL. v. WHITING: