New Study on Immigrant Integration Compares and Ranks the United States, Canada, and Europe: US Ranked in Top 10 Among 31 Countries 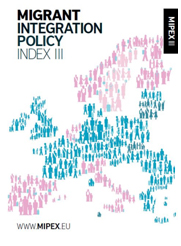 In cooperation with the Immigration Policy Center, the British Council and the Migration Policy Group release a new study today which reviews and ranks U.S. immigrant integration policies against other countries. The Migrant Integration Policy Index (MIPEX: www.mipex.eu) contrasts and compares integration policies for legal immigrants across countries in Europe and North America. The United States is ranked ninth among 31 countries. This is the first year the United States has been part of the study, and IPC is pleased to be chosen as the U.S. partner for this important study.

The MIPEX compares and ranks countries across 148 policy indicators, providing objective and comparable data presented in a reference guide and an interactive online tool to help policymakers, advocates and researchers assess and compare integration policies around the globe. The policy indicators are divided into seven categories: employment opportunities, family reunion, education, political participation, long-term residence, access to citizenship and anti-discrimination. Countries include all 27 EU member states, Norway, Switzerland, Canada, and the USA.

Overall the U.S. ranked ninth in terms of integration policies, and first in terms of its strong anti-discrimination laws and protections. The U.S. also ranked high on the access to citizenship scale because it encourages newcomers to become citizens in order to fully participate in American public life. Compared with other countries, legal immigrants in the U.S. enjoy employment opportunities, educational opportunities, and the opportunity to reunite with close family members. However, MIPEX also acknowledges that the U.S.'s complex immigration laws, limited visa ability, high fees, and long backlogs may make it challenging for immigrants to integrate into the fabric of American life.

"As the United States continues to struggle with its own immigration policies, the MIPEX index offers policymakers and the public a framework for analyzing our best and worst practices on immigrant integration compared to other countries in the world. We have much to learn from other countries as well, but perhaps the greatest lesson that comes from MIPEX is that the very things that distinguish the United States are worth preserving as we move forward into the next decade of the 21st century," said Mary Giovagnoli, Director of the Immigration Policy Center.

Listed below are links to weblogs that reference New Study on Immigrant Integration Compares and Ranks the United States, Canada, and Europe: US Ranked in Top 10 Among 31 Countries :