From the Bookshelves: Nation of Immigrants by Susan F. Martin 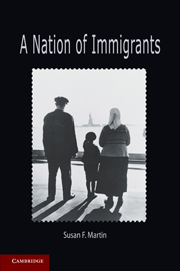 A Nation of Immigrants Susan F. Martin (Cambridge University Press, 2010).  ABSTRACT:  Immigration makes America what it is and is formative for what it will become. America was settled by three different models of immigration, all of which persist to the present. The Virginia Colony largely equated immigration with the arrival of laborers, who had few rights. Massachusetts welcomed those who shared the religious views of the founders but excluded those whose beliefs challenged the prevailing orthodoxy. Pennsylvania valued pluralism, becoming the most diverse colony in religion, language, and culture. This book traces the evolution of these three competing models of immigration as they explain the historical roots of current policy debates and options. Arguing that the Pennsylvania model has best served the country, the final chapter makes recommendations for future immigration reform. Given the highly controversial nature of immigration in the United States, this book provides thoughtful, well-reasoned analysis, valuable to both academic and policy audiences for the ways it places today’s trends and policy options into historical perspective.

Listed below are links to weblogs that reference From the Bookshelves: Nation of Immigrants by Susan F. Martin :