Attorney Gloria Allred said today that she has "Irrefutable" evidence that former Republican gubernatorial candidate Meg Whitman owes her former Mexican housekeeper between $8,000 and $10,000 in wages and mileage.

The amount - which includes what the housekeeper spent on driving - is more than the approximately $6,000 wage claim that was originally filed against Whitman on Sept. 29.

Whitman's husband, Griffith Harsh, an attorney for the couple and Whitman spokesman Tucker Bounds are at a meeting this morning with Allred and former housekeeper Nicky Diaz Santillan in downtown San Jose at the Department of Industrial Relations. Read more... 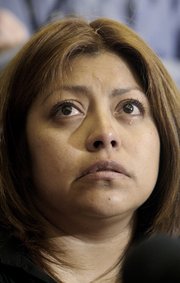 Listed below are links to weblogs that reference Former Whitman Nanny Before Labor Panel Today: