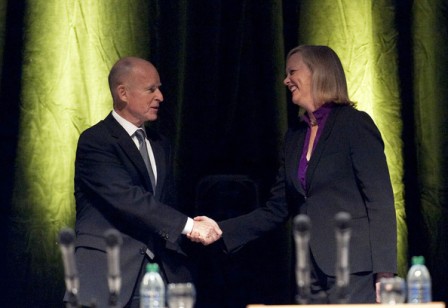 As expected, each played to their strengths.  Whitman had a much smoother performance (much like the first debate at UC Davis) than in the last debate at Fresno State, which was just days after the revelation about Whitman's employment of an undocumented Latina domestic service worker, where she was pilloried on immigration on Spanish language television.

Jerry Brown emphasized his support for comprehensive federal immigration reform and cooperating with the federal government in deporting criminal aliens as well as his opposition to an exploitative guest worker program (at least one that did not allow for a path to permanent resident status).  He also glibly mentioned that Whitman fired her undocumented employee after nine years and did not even help get her a lawyer!

Listed below are links to weblogs that reference Final Debate in California Gubernatorial Race: