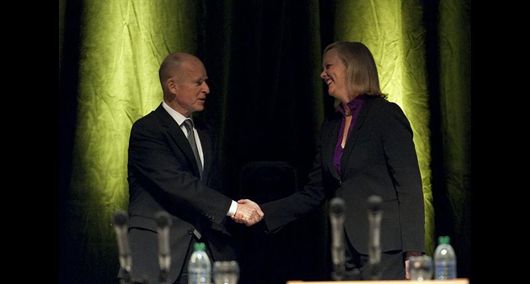 I was at the debate last night at UC Davis between California gubernatorial candidates Meg Whitman, Republican, and Jerry Brown, Democrat.  Both performed as one might have guessed on questions about jobs, taxes, schools, the economy, the death penalty, and the budget, as well as Whitman's failure to vote for many years and Brown's record as a "career politician."

Jerry Brown was Jerry Brown -- iconoclastic, unscripted, and, at times, witty.  Meg Whitman performed well in a scripted, some might say disciplined and stylized and unquestionably corporate, kind of way.  He hung around after the debate to shake hands with the crowd.  She dashed away to the spin room.

On the issues, the debate also was as predicted, with, by most accounts, no clear winner or loser.  Brown suggested that California had experience with electing a non-politician Governor (Arnold Schwarzenegger) who had been successful in the private sector and had not been particularly successful as Governor.  Whitman's constant theme was that Jerry Brown was beholden to the "special interest" labor unions.

What stuck out in my mind was Whitman's pledge to "attack welfare" to try to balance the state budget.  That is harsh, politically charged language to use in reference to programs designed to serve as a safety net for poor families and children, the most vulnerable among us.  Over the last few years, these programs have been cut to the bone.  The poor have suffered in the bad economy while, at the same time, the safety net has evaporated.  Still, empathy did not appear to be one of Whitman's motivators in pledging to "attack welfare," which some might view (like talk of being tough on crime) as code for attacking African Americans and Latinos.

On immigration, Brown stated his support for comprehensive immigration reform with more enforcement and a path to legalization for undocumented immigrants.  He also mentioned that the Attorney General's office had participated in the federal government's Secure Communities program, in which state and local governments provide information about criminals to federal immigration authorites.  Whitman registered her opposition to a legalization program and support for more enforcement, including workplace enforcement of the bar on the employment of undocumented immigrants.  She also supported a guest worker program because of, what she said, was the need for immigrant workers in agriculture.

Jerry Brown understood that immigration regulation was primarily in the hands of the federal government.  Whitman did not seem to be clear on that point.  Arizona's SB 1070 did not come up in the debate.  Whitman's curious position had been that SB 1070 was good in Arizona but not in California.

For a full report on the debate, click here and a video.

Listed below are links to weblogs that reference Whitman and Brown Debate at UC Davis: