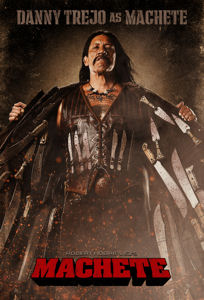 Watch for the release of the Robert Rodriguez film Machete.  Here is the plot summary:

The highly skilled Federale Machete is hired by some unsavory types to assassinate a senator. But just as he's about to take the shot, he notices someone aiming at him and realizes he's been set up. He barely survives the sniper's bullet, and is soon out for revenge on his former employers, with the reluctant assistance of his old friend Cheech Marin, who has become a priest and taken a vow of nonviolence. If you hire him to take out the bad guys, make sure the bad guys aren't you!

The cast is amazing:

Danny Trejo as Machete, a legendary ex-Federale with a deadly attitude and the skills to match.

Steven Seagal as Torrez, a druglord.

Michelle Rodriguez as Luz aka Shé, a taco-truck lady with a rebellious spirit and revolutionary heart.

Jeff Fahey as Michael Benz, a ruthless businessman with an endless payroll of killers.

Cheech Marin as Padre, a priest who's good with blessings, but better with guns.

Lindsay Lohan as April Benz aka The Sister, a socialite with a penchant for guns" and a nun with a gun."

Jessica Alba as Sartana, a beautiful Immigrations Officer torn between enforcing the law and doing what is right."

Rose McGowan as Ginger, hired by Benz Electra and Elise Avellan as The Nurses at the hospital where Machete is treated.

Listed below are links to weblogs that reference Film Lookout: Machete!: