Filipino Americans and Chinese Americans are the two largest Asian American communities in California and in the United States in large part due to immigration policies.

Gov. Arnold Schwarzenegger will nominate Tani Cantil-Sakauye, a Republican appellate court justice with a reputation as a moderate, to be chief justice of the California Supreme Court, The Bee learned Tuesday. 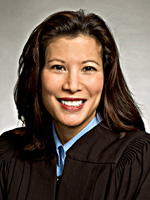 Cantil-Sakauye, 50, of Sacramento is a former prosecutor and Sacramento Superior Court judge. She would replace Chief Justice Ronald George, who has announced he will retire Jan. 2.

Cantil-Sakauye has been on the 3rd District Court of Appeal since 2005. If approved by a three-member commission and by voters in November, she would start a 12-year term in January.

She would be the state's first Filipina American chief justice.

"Justice Tani Cantil-Sakauye has a distinguished history of public service and understands that the role of a justice is not to create law, but to independently and fairly interpret and administer the law," Schwarzenegger said in a statement contained in a draft news release obtained by The Bee.

Cantil-Sakauye was quoted in that release as saying, "Being nominated to serve on the highest court in California is a dream come true."

While on the 3rd District Court of Appeal, Cantil-Sakauye wrote the court's opinion this year striking down a California regulation that allowed trained school staffers to give insulin shots to students. Nurses had challenged the regulation, adopted in 2007.

Cantil-Sakauye dissented last year when the court majority ruled that the city of Sacramento was not liable in a case in which a woman claimed two firefighters sexually assaulted her. The majority opinion said the alleged assault was not among the firefighters' official duties.

She is a graduate of U.C. Davis School of Law.

Listed below are links to weblogs that reference Schwarzennegger Nominates Filipina to State Supreme Court: