Immigrant of the Day: Ingacia Moya (Mexico) -- A Naturalized U.S. Citizen at 106! 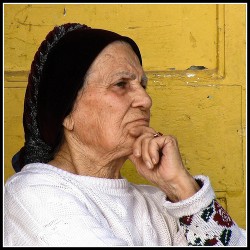 Here is a real immigrant success story.  Ingacia Moya, frail, blind and with bad hearing at 106 years old, went through naturalization ceremonies in Chicago on Monday and became a U.S. citizen.  Moya had been a legal resident of the United States since moving here almost 40 years ago from Mexico.  In 1986, she studied for the citizenship exam but failed as she lost her sight and hearing.  Rep. Luis Gutiérrez assisted her with obtaining a medical waiver.  Moya's wants the opportunity to vote in November.  "When asked how she felt, Moya said `muy bien!'"

There appear to be only two or three other people who were older than Moya when they became U.S. citizens. The oldest was a 117-year-old woman from Turkey.

Listed below are links to weblogs that reference Immigrant of the Day: Ingacia Moya (Mexico) -- A Naturalized U.S. Citizen at 106!: