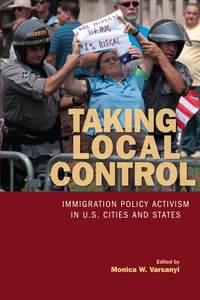 Stanford University Press has published Taking Local Control: Immigration Policy Activism in U.S. Cities and States, edited by Monica Varsanyi (Associate Professor of Political Science in the John Jay College of Criminal Justice, City University of New York).  Here is an abstract:   While state and local immigration policy activism in the U.S. has received widespread attention in the popular media, the scholarly literature has been dominated by studies of immigration policy at the federal level. This volume aims to fill the gap by offering perspectives from political scientists, legal scholars, sociologists, and geographers at the leading edge of this emerging field. Drawing on high profile case studies, the contributors seek to explain the explosion in state and local immigration policy activism, account for the policies that have been considered and passed, and explore the tensions that have emerged within communities and between different levels of government as a result. This timely entrant into the study of state and local immigration policy also illuminates the significant challenges and opportunities of comprehensive immigration reform, highlights the range of issues at stake, and charts a future research agenda that will more deeply explore the impacts of these policies on immigrant communities.

Listed below are links to weblogs that reference From the Bookshelves: Taking Local Control: Immigration Policy Activism in U.S. Cities and States: