Deportation by Default: Mental Disability, Unfair Hearings, and Indefinite Detention in the US Immigration System 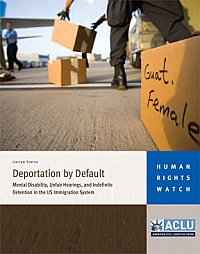 A new report by Huamn Rights Watch, "Deportation by Default: Mental Disability, Unfair Hearings, and Indefinite Detention in the US Immigration System," says that immigrants with mental disabilities are often unjustifiably detained for years on end, sometimes with no legal limits. The report documents case after case in which people with mental disabilities were prevented from making claims against deportation - including claims of US citizenship - because they were unable to represent themselves. Some of the people interviewed for the report did not know their own names, were delusional, could not tell time, or did not know that deportation meant removal from the United States.

Listed below are links to weblogs that reference Deportation by Default: Mental Disability, Unfair Hearings, and Indefinite Detention in the US Immigration System: