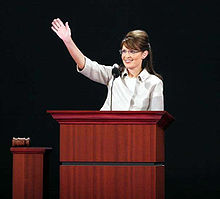 Conservative firebrand Sarah Palin, not suprisingly, is a big supporter of Arizona's foray into immigration law. She has spoken in its favor at numerous events in recent weeks and appeared with Arizona Governor Jan Brewer this weekend:  “It’s time for Americans across this great country to stand up and say, ‘We’re all Arizonans now,’” Palin said. “And in clear unison we say, ‘Mr. President: Do your job. Secure our border.’”

Here is Palin's full message on the Arizona law on Facebook:

"Let’s respect the hardworking, accomplished legal immigrants who sacrificed much, contributed selflessly, and helped build America into the greatest melting pot on earth! We need to understand the importance of America’s fair immigration laws.

Erasing U.S. borders will destroy our country as we become less safe – and this national security issue is what Arizona and other border states are addressing with reinforcement of federal immigration laws. They have to do it because the feds aren’t doing it.

I spoke with Arizona Governor Jan Brewer yesterday, and she reminded U.S. citizens that, despite President Obama’s ignoring this grave national security threat, his dismissal of the need for border security is no laughing matter – and it’s being used as a political tool to divide her state along racial lines.

Log on to securetheborder.org to learn more and show your support for our sister state of Arizona! We’re all Arizonans now and we say with clear unity: “Mr. President, do your job. Secure our border.”

The Securetheborder.org website mentioned in Palin's message includes the following "defense" of Arizona:

"instead of taking action to help, the state has come under attack by people who are misrepresenting Arizona’s laws and trying to hurt our efforts to support the rule of law. They include President Obama, Al Sharpton, the East Coast media, and political strategists who are trying to use the issue of illegal immigration for political gain."

I wonder why Reverend Sharpton is listed with President Obama as one of the troublemakers for Arizona, as opposed to say, Senator Lindsay Graham and Tom Tancredo, two conservatives who have questioned the law?  Can you spell R-A-C-E B-A-I-T-I-N-G?

Listed below are links to weblogs that reference Sarah Palin: "We’re all Arizonans now”: