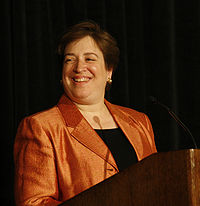 An important immigration case pending in the U.S. Supreme Court involving a previous effort by the state of Arizona to regulate immigration will probably be in the news again in the coming weeks.  Given the huge controversy over Arizona's latest immigration law and the heated politics of Supreme Court nominations, the case -- and the position ultimately taken by the United States in the case -- may have implications on the confirmation of Elena Kagan to the Supreme Court.

Chamber of Commerce of the United States v. Candelaria is currently before the Court.  It raises the questions

(1) whether an Arizona statute that imposes sanctions on employers who hire unauthorized immigrants is invalid under a federal statute that expressly “preempt[s] any State or local law imposing civil or criminal sanctions (other than through licensing and similar laws) upon those who employ, or recruit or refer for a fee for employment, unauthorized aliens”;

(2) whether the Arizona statute, which requires all employers to participate in a federal electronic employment verification system, is preempted by a federal law that specifically makes that system voluntary;

(3) whether the Arizona statute is impliedly preempted because it undermines the “comprehensive scheme” that Congress created to regulate the employment of immigrants.

In an opinion by Judge Schroeder, the Ninth Circuit (Download 09-115_ca9[1]) upheld the Arizona law.  Last November, the Court (and here) invited the United States to file a brief expressing the views of the United States in the case.  As Solicitor General, Kagan will be filing the brief.  She has yet to do so, which now is generating much speculation about the reasons for the delay.  See here and here.

I bet that SG Kagan wished that she had filed that brief in December!

Listed below are links to weblogs that reference Elena Kagan and the Arizona Business Licensing Case (Chamber of Commerce of the United States v. Candelaria):