Yesterday, I traveled to Southern California to attend the 2010 Chapman Law Review School Symposium on “Drug War Madness: Policies, Borders, and Corruption.” The conference brought together an impressive group of speakers with a variety of diverse insights on drugs, borders, and national security. 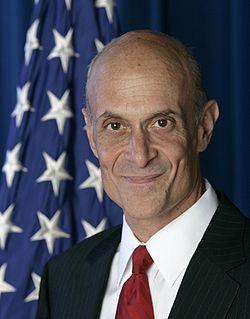 The keynote speaker at lunch was former (2005-09) Secretary of the Department of Homeland Security Michael Chertoff, now senior of counsel with Covington & Burling and co-founder of a risk management and security consulting firm. Chertoff talked about narcoterrorism and the increasing interrelationship between drug dealers and political insurgent movements around the world. He claimed that Colombia’s FARC (Revolutionary Armed Forces of Colombia) was now working with political and other groups around the world, from South America to Europe. Chertoff predicted that, in the future, it would be difficult to distinguish drug traffickers from political insurgents. In discussing recent events in northern Mexico, Chertoff mentioned that the drug cartels were engaging in similar strategies as certain Islamic terrorist groups -- beheadings, kidnappings, and torture -- with the same intention – to terrorize the population.

Chertoff mentioned several security issues that were of interest, with some of them still needing to be addressed:

1. The Problem of Ungoverned Space:  The United States must attempt to deal with the problem of “ungoverned space” in nations like Afghanistan, Pakistan, Somalia, and parts of North Africa and South America.  The problem occurs when governments cannot control parts of their territorial jurisdiction, which then can become safe havens for terrorists.

--  Increasing the physical security of the borders.  Chertoff acknowledged that terrorists tend to use airline travel currently to come to the United States but he stated that they could try land border crossings in the future. For that reason, as Secretary of DHS, he supported the increased fencing along the U.S./Mexico border and doubling the size of the Border Patrol.

Chertoff concluded his remarks by emphasizing that drugs and political movements are increasingly intertwined and that this will create more work for lawyers as the legal rules of engagement are worked out.

Besides the keynote, the conference had three panels of speakers.  Associate Dean Tim Canova welcomed the group with some introductory comments in the morning and was followed by Marc Mauer, Executive Director of the Sentencing Project, which has been critical of U.S. drug policies.

The first panel was on U.S. Drug Policy and Alternative Paradigms. Among others, it included the former Director of the Drug Enforcement Agency and Undersecretary of Homeland Security, Asa Hutchinson. Among the interesting tidbits offered by this panel was the admission by a former senior DEA supervisor that he had been involved in bringing Humberto Alvarez-Machain from Mexico to the United States, an act that resulted in years of litigation, including a decision by the U.S. Supreme Court, and an arrest warrant issued against the DEA agent in Mexico.

The second panel was on “Cross Border Flows: Drugs, People & Trade.”   The moderator of the panel was Ernesto Hernández (Chapman) who offered some theoretical background about the meaning of the border.  My talk was entitled “It’s the Economy, Stupid: The Hijacking of the Debate Over Immigration Reform by Monsters, Ghosts, and Goblins (or the War on Drugs, War on Terror, Narcoterrorists, Etc.)."  It focuses on how immigration, at its core motivated by economic opportunity and the desired access to U.S. labor markets, really should be viewed separately from the "drug war" and the "war on terror."

Jennifer Chacón (UC Irvine) discussed the increased use of criminal immigration prosecutions by the U.S. government in immigration enforcement and expressed concerns over (1) the efficacy of this strategy; (2) whether the resources devoted to it were efficiently being used: (3) the potential for burnout among the U.S. attorneys, federal public defenders, and judges processing the mass of immigration prosecutions; and (4) the dehumanizing procedures being employed in prosecuting the cases. Ruben García (California Western) discussed a group of drug war casualties who are often ignored, the hundreds of women who worked in the maquiladoras who have been killed in Ciudad Juarez over the last 20 years. His remarks reminded me of the more general issue of the regular deaths on the U.S./Mexico border, with thousands of Mexican migrants having died trying to cross since the early 1990s. Today, about one person a day dies trying to cross.

The last panel was on “Narcoterrorism, Organized Crime, and Political Corruption.”

In sum, the “Drug War Madness” conference was well-organized, provocative, and interesting. The audience asked great questions and was obviously intellectually engaged.  The Chapman Law Review and Chapman University School of Law should be proud.