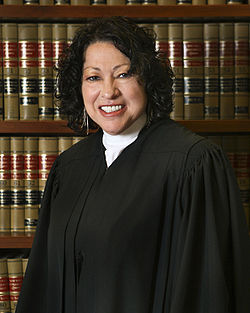 Justice Sonia Sotomayor has written her first opinion for the Supreme Court -- and she already has made a difference.  As the N.Y. Times observed, "Justice Sotomayor’s opinion in the case, Mohawk Industries v. Carpenter, No. 08-678, marked the first use of the term `undocumented immigrant,' according to a legal database [in a Supreme Court opinion].The term 'llegal immigrant' has appeared in a dozen decisions."  The decision in the Mohawk Industries case involved a technical legal issue that only civil procedure professors could love -- whether an interlocutory order on an attorney-client privilege matter could be appealed immediately or must await a final judgment on the case -- in a case involving a business that allegedly employed undocumented immigrants.  Click here for details.

As Bill Hing has previously posted on ImmigrationProf, and I have written on Concurring Opinions, the choice of terminology -- aliens. illegal aliens, illegal immigrants, undocumented immigrants, people -- matters in the discourse over immigration.  Consequently, by employing a more neutral term, Justice Sotomayor has added significantly to the Supreme Court's dialogue on immigration, which is likely to be with us for the foreseeable future.

Listed below are links to weblogs that reference Justice Sotomayor Makes a Difference!: