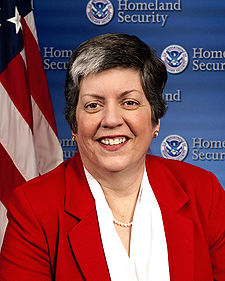 The American Law Institute annual meeting in Washington, D.C. featured Janet Napolitano, Secretary of Homeland Security and former Governor of Arizona, as the speaker at the annual dinner last night.  Here is a report from Professor Steve Bender (Oregon), who was in the audience:

"In her ALI keynote Janet Napolitano emphasized three issues in detailing her immigration reform strategy, and all of them focused in some way on enforcement: the need for including state and local governments in immigration enforcement (extolling section 287(g)), the need for different enforcement treatment of differing immigration culpability (distinguishing an undocumented child who grew up speaking English and never visiting Mexico from a murderous undocumented drug dealer), and finally, pursuing employers in addition to their undocumented employees, and perfecting the e-verify system. . . . [S]he urged the greater inclusion of public lawyers (prosecutors) in ALI, and argued against ALI weighing in on the immigration issue, suggesting that few, if any, ALI members had legal expertise on the immigration issue that was best left to political circles. At least three ALI members at my dinner table objected afterward to that suggestion, one of them the author of an immigration law casebook."

Listed below are links to weblogs that reference Napolitano Speaks at ALI: Enforcement Now, Enforcement Forever?: