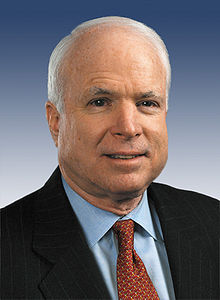 David Catanese on Politico.com reports that Senator John McCain will face a challenger in the Republican primary -- Chris Simcox, the controversial founder of the Minuteman Civil Defense Corps, a restrictionist group that patrols the border in the name of immigration enforcement.  Accodring to Catanese,

"Questions about Simcox’s colorful and controversial past range from character issues to concerns about his fiscal stewardship of the Minuteman organization. In 2006, Simcox appeared in a documentary film about border security called `USA Under Attack,' in which he referred to Mexicans as `enemies of the state' and said, `I think they should be shot on sight, personally.'

Simcox doesn’t back down from the statement, saying his comments referred to drug dealers. `No, I don’t regret it, because at the time I was pretty angry,` he told POLITICO."

Simcox has his unveiled a Simcox for Senate website.  Most political observers do not give Simcox much of a chance of upsetting McCain, even though some Arizona conservatives are not enthralled with the Senator.