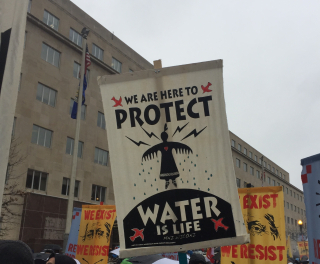 Today, as we celebrate World Water Day, we must take a hard look at how we’re treating the environment, as well as Indigenous communities who are frequently its defenders. All too often, the construction of gas pipelines threatens the availability, accessibility, and quality of water, required under international human rights law.

Moreover, human rights law recognizes a link between the right to water and culture. While domestic uses of water take priority, the UN Committee on Economic, Social and Cultural Rights affirms the importance of water for “enjoying certain cultural practices” and securing a livelihood. Non-consumptive uses of water crucial to Indigenous communities include its centrality in a biological habitat, its spiritual value as a source of healing, and its aesthetic value.

Indigenous advocates point to the environmental degradation pipelines cause on Indigenous lands. Angeline Cheek, a Fort Peck tribal member and ACLU organizer in Montana, stated, “pipelines cross our reservations, causing destruction to our environment and our people. We can’t live without water, and you cannot replace a life.” A teenage Indigenous protest leader explained, “When the pipeline breaks, it would not only affect us as a people, but the animals and aquatic life would be impacted too.  Basically, everything that my people value and care for is at great risk of being harmed.”

The construction and operation of the pipeline also brings violence, including sexual violence, against members of nearby Indigenous communities. The hundreds—or even thousands—of male transient workers brought in to work on the pipeline construction, often housed in temporary housing communities referred to as “Man Camps,” have targeted Indigenous communities and women. Studies of the Bakken oil region have noted a 75% increase in sexual assaults and a 53% increase in violence committed by strangers that coincided with the oil boom and the influx of “well-paid oil and gas workers, living in housing units referred to as Man Camps.”

Even worse, these perpetrators often face no repercussions for their actions. Local infrastructure is strained from the influx of workers, without the provision of increased resources to health services and law enforcement, who already have large geographic regions to cover. Additionally, there is an enforcement loophole with Indian tribes lacking jurisdiction to prosecute non-Indigenous defendants. This requires reliance on the federal government, which often fails to take action. There is thus a general lack of accountability, and crimes are committed with impunity.

While the Violence Against Women Act (VAWA) helps address some jurisdictional problems, this legislation does not go far enough to protect Indigenous Peoples from non-native offenders. VAWA only authorizes “special domestic violence criminal jurisdiction” to tribal courts for offenders who commit “(1) domestic violence, (2) dating violence, or (3) violate a protective order.” These limitations mean that the non-native offender must have connections to the tribe, which is often not the case for violence perpetrated by workers at Man Camps given their temporary nature. Furthermore, the special jurisdiction does not include the crime of sexual assault when unconnected to domestic or dating violence.

Halting the Keystone Pipeline is a step in the right direction. The pipeline was set to traverse nearly 875 miles of rural land in the Northern U.S., crossing major waterways, such as the Missouri and Yellowstone Rivers, and passing through Rosebud Sioux and Fort Belknap Indian Community lands in Montana, threating sensitive ecological and cultural areas. Years of legal battles and protests from Indigenous Peoples were finally heard when the Biden Administration’s Executive Order conceded that the Keystone XL Pipeline “disserves the U.S. national interest” and revoked its permit, ending construction.

Indigenous Peoples have widely praised the Order. Angeline Cheek noted, this Order “is about honoring our ancestors’ treaties and protecting our natural resources.” Faith Spotted Eagle, founder of the Brave Heart Society and a member of the Ihanktonwan Dakota nation, remarked, “victory ending the KXL pipeline is an act of courage and it gives tribes and Mother Earth a serious message of hope for future generations as we face the threat of climate change.”

Now, we need to build on Biden’s Executive Order and put in place better policies. International human rights law requires the “free, prior, and informed consent” of Indigenous Peoples as a prerequisite for use of Indigenous land and resources. Meaningful consultation is critical, but it is not enough. There must also be consent. Additionally, Indigenous Peoples need the resources to invest in infrastructure, as well the authority to prosecute non-Indigenous perpetrators on their lands, eliminating the jurisdiction loophole.

As we celebrate World Water Day, let’s move towards a greener and safer future, respecting both the environment, as well as the communities physically and culturally connected to the earth’s resources.