An Amazing Day for the Human Rights at Home Blog

Seven years ago, we founded the Human Rights at Home Blog.  With the assistance of our Co-Editors and our Guest Bloggers, the Blog has developed a national and international following.  As of today, we have almost 840,000 hits!  We are humbled by the support our readers have shown us.

Today is our last day as lead Editors.  We are delighted to announce that Prof. Lauren Bartlett of St. Louis University School of Law assumes the role of Editor.  Many of you are already familiar with Lauren as a leader in Human Rights advocacy in the law school world.  Lauren teaches the Human Rights at Home Litigation Clinic at SLU and writes on human rights, legal ethics, and access to justice.

We look forward to contributing as Co-Editors and watching the Blog thrive under Lauren’s leadership.

UN Experts Call Out the US on Guantanamo

Rule of law, you say?  Earlier this week, a roster of UN Special Rapporteurs called on the U.S. government to not only close Guantanamo but to do more: provide reparations to those injured, and accountability for conditions imposed on those kept there, including torture.  President Biden has pledged to review Guantanamo operations with the intent to close the site, but how many times have we heard that before?  According to the UN experts, these years of delay have taken a tragic toll, and "many of the remaining detainees are vulnerable and now elderly individuals whose physical and mental integrity has been compromised by unending deprivation of freedom and related physical and psychological torture and other cruel, inhuman or degrading treatment or punishment."

Also this week, Secretary of State Blinken indicated that the U.S. would run for a seat on the UN Human Rights Council in October 2021, a welcome development after years of isolation from international institutions.  But with that re-engagement should come a heightened obligation to improve our human rights record at home.  Ending the continued travesty of Guantanamo, and making serious reparations for the damage caused, must be a prerequisite to the US reclaiming its standing in international human rights institutions.

Virginia became the first southern state to abolish the death penalty.  The legislature has passed the bills abolishing the death penalty and the governor is expected to sign the bills.  At one time, Virginia is was the most prolific state for implementing executions.  Virginia has executed more people than any other jurisdiction.

Earlier this month, Virginia decriminalized HIV - previously the law criminalized having sex with another when one is living with HIV.  The criminalization law required that the person living with HIV disclose their positive status to their sex partner, even if there is zero possibility of transmitting  HIV.  For those receiving treatment for their HIV, viral loads typically are undetectable.  There is no possibility of transmitting HIV under those circumstances.  For those states that retain HIV criminalization laws, disclosure of the condition is required whether or not transmission is possible.   The bill maintains as a misdemeanor placing a sexual partner at risk of infection when a substantial likelihood of transmission exists.  As one advocate said, “This bill ensures Virginia code reflects current scientific understanding of HIV and promotes public health by alleviating the stigma and mistrust of health institutions."

Supreme Court Affirms That The US Is A Christian Country

On February 11, 2021, the US Supreme Court let stand a ruling that stayed the execution of a man in prison in Alabama.   William B. Smith III requested that his Christian Pastor be present at his execution.  Mr. Smith's lawyers argued that their client needed his pastor present to provide him comfort   “including by holding his hand, praying with him in his final moments and easing the transition between the worlds of the living and the dead.”  Barrett, Breyer, Kagan, and Sotomayor voted to uphold the bar on Smith's execution.  Justice Kagan wrote:  "I concur in the Court’s decision to leave that order in place, and I write to explain why. Alabama has not carried its burden of showing that the exclusion of all clergy
members from the execution chamber is necessary to ensure prison security. So the State cannot now execute Smith without his pastor present..."

One year earlier the Court refused to stay another Alabama execution where a Muslim inmate requested the presence of his Imam at the execution.  In that case, the Court lifted a stay of execution that the appeals court had entered saying that Mr. Ray, the individual awaiting execution, waited too long to make his request known. (But aren't many requests for Supreme Court stays brought in the last hours?)  Justice Kagan dissented.   "The clearest command of the Establishment Clause, this Court has held, is that one religious denomination cannot be officially preferred over another. Larson v. Valente, 456 U. S. 228, 244 (1982). But the State’s policy does just that. Under that policy, a Christian prisoner may have a minister of his own faith accompany him into the execution chamber to say his last rites. But if an inmate practices a different religion—whether Islam, Judaism, or any other—he may not die with a minister of his own faith by his side. That treatment goes against the Establishment Clause’s core principle of denominational neutrality."

Expecting rational thinking and attention to details in pre-planning one's own violent death is particularly harsh and unempathetic.  A belated request for religious comfort is not unreasonable and should not be unexpected.  The perspective on last-minute requests appears to change, however, when the clergy requested by the condemned is Christian.  In such a case, the law reveals its more sympathetic side.

Buildings and Climate Change: "It's not Rocket Science"

As a freeze sweeps across the country, are you (like me) sitting in your drafty home, wrapped in a blanket, and whiling away your time listening to podcasts?  Here's one that brings together the UN, climate goals, and New York in a discussion of how some of the 4 million buildings in NY State are being retrofitted to minimize their environmental impact -- and to use heat and cold air more efficiently.

The Cause of All Humanity 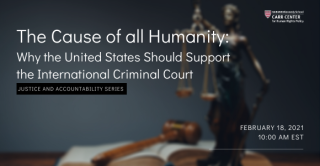 Harvard Carr Center for Human Rights Policy will host a webinar on February 19th.  The discussion will address why the US  should support the International Criminal Court.

Speakers will include the President of the International Criminal Court.  The panelists are:

The link for registration can be found here.

Just a few days ago, a new documentary "My Name is Pauli Murray" received its world premier at the Sundance Film Festival.

Directed by the creative team responsible for the Academy award nominated documentary "RBG," the new film on Pauli Murray delves into Murray's rich and varied life, and intellectual contributions in the arenas of civil rights, gender rights, and gender identity as well as theology.  Murray knitted together this range of interests and causes under the concept of "human rights."

After contributing to the theoretical underpinnings of Brown v. Board of Education and Reed v. Reed as a lawyer, Murray turned her energies to the Episcopal Church later in life, becoming a priest. Following her death in 1985, Murray was named to Episcopal sainthood.

As yet, the documentary is not available to stream nor has it been released in theaters, but for more background from the filmmakers and clips from the film, check out this extended clip from Democracy Now.

American Jurist Named President of the International Court of Justice

On February 8, the ICJ announced the election of H.E. Judge Joan Donoghue (United States), a member of the court since 2010, to the position of President of the ICJ.  Donoghue will serve as President for a three-year term. Prior to joining the ICJ, Donoghue served in a series of U.S. State Department positions, culminating with a stint as the senior career attorney in the Department during the Obama Administration.

Notably, H.E. Judge Donoghue is one of only three women sitting on the 15-judge court. The lack of gender diversity on the court has been labeled a "matter of urgency" by those calling for reform of the ICJ's judicial selection processes.

The Human Rights Watch Film Festival begins on Tuesday.   Adapting to a digital format,  the festival features a number of films centering on fundamental principles of human rights and the various contemporary needs of people around the globe.  The festival will run through Monday.

As reported by KBPS, "The festival, returning to MOPA for its 11th year, will feature critically acclaimed films on topics including LGBTQ rights, immigrant rights, equal access to child care for working-class parents, freedom of speech, and systemic racism."   Movies include a film on the need for overnight child care to assist parents working in our 24/7 culture.  Another documents the attempts of a group in Sudan to being back open-air films following a ban on cinemas following a coup.

More information can be found here.