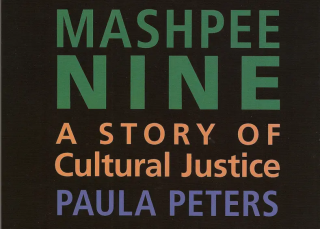 As reported in Indian Country Today, author  Paula Peters documented  a brutal attack on nine Mashpee Wampanoag men.  The book is titled Mashpee Nine: A Book of Cultural Justice and is a companion to the documentary Mashpee Nine: The Beat Goes On.

The book documents a 1976 brutal tactical police attack on Wampanoag drummers that came at a time that the American Indian Movement had become a nationally recognized movement and as Native people sought the recognition and civil rights that alluded them (and still does) despite the Civil Rights Movement on the 1960s. The arrests and ensuing trial are significant in the history of Northeast tribes.  As Ms. Peters explains, the young men who were arrested are now elders and their story was in danger of being lost.

While the Mashpee Wampanoags  have succeeded in obtaining tribal recognition, they continue  under assault from the Trump administration.  The ongoing white colonial oppression makes the history recorded in Mashpee Nine essential to understanding the white efforts to remove any power from the tribe.   Ms. Peters, who is Mashpee Wampanoag, informs on the history of Native people in the Northeast, particularly on Cape Cod. The tribe has ancient roots going back over 10,000 years.  Their history since white contact was one of the first to experience the aggression, forced Christianization, and other white attempts at reducing tribal numbers and influence.  The book presents an essential part of our histories.