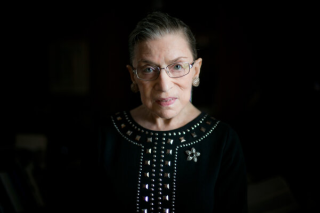 In ordinary times, I would be delighting in remembrance of Justice Ginsburg's life and toasting her amazing leadership as a woman and a jurist.  She lived a long and heroic life. We could not have  asked more of her as a woman, as a lawyer, as a citizen.  She improved the lives of generations of women and others whether we realized that or not.  In ordinary times, there would be no greater time for celebration of an extraordinary woman and an extraordinary  life.

I grew up on the coattails of the second wave feminists.  These were times of major change, particularly in the law but also the beginning of (white) women's advances in the workplace. Brave women pushed through previously unopened doors.  Life was not pleasant for them, but they broke barriers despite the indignities that accompanied their success.  On the legal side, Ruth Bader Ginsburg brought cases targeted to break sexist barriers.   She too suffered indignities, as anyone who was watched the film On The Basis of Sex or the documentary RBG observed.  Under no circumstances was Justice Ginsburg's life an easy one.  Everything she gained carried with it a professional, and sometimes personal, cost.   One reason we loved her was her perseverance.  Our hero sacrificed much but left behind a roadmap for those fighting barriers. She and Marty Ginsburg modeled what equality looks like in a personal partnership not tied to gender roles. The marriage advice  Justice Ginsburg received from her grandmother  "be a little deaf" was applicable during her work life also, including her time on the Supreme Court.

But these are not ordinary times.  These are times where the politics of replacement for RGB began literally as she lay dying.  The political fight that is about to erupt leaves no time for mourning.   Those of us who loved her are vulnerable.  We are asked to postpone our grief to carry on the fight - and I admire those who can do so, particularly those of younger generations.

Why I mourn is that so many advances for women are endangered.  For those of us who have spent the last several decades fighting for women's rights, we wonder if the world we thought we had made for women is such a fragile illusion that fundamental human rights for women will soon be just an historical blip.

With some sleep and sunshine, I recognize that the weight of leadership that Justice Ginsburg carried during her lifetime should not be on her in death.  To be hopeless is to dishonor her work. Our hero's passing must not end the fight. She showed the way and it is up to the rest of us to continue resistance. No excuses.

I agree. I was so upset for myself because I lost a true hero, but I was devastated for her, knowing she died with such a weight on her mind. She knew what was coming and, for what I assume was one of the few times in her life, she couldn’t fix it. On her deathbed, she gave us a call to action. Her passing has given the fight a vital push to the finish line. I have not lost faith yet.

So very true. As others have said, her fight has ended, and she showed us what to do. Now, it is our turn.