Hamilton and our National Story

With theaters dark for the time being, homebound audiences cheered from their couches when Hamilton, taped live on Broadway, began streaming on this past Friday of the long July 4 weekend.

But the show has changed.

Or more accurately, its meaning has shifted as our national story has been written out over the five-plus years since Hamilton premiered off-Broadway in February 2015.  The well-known lines from the show, on immigrants, race, corruption ("the room where it happened"), democracy, have a new, evolving resonance in the era of Black Lives Matter, COVID-19, travel and asylum bans, emoluments, and William Barr's Department of Justice.

Cynthia Soohoo's popular blog entry on her own visit to the Broadway production in November 2016, also attended by Mike Pence. is re-published below.  It is well worth re-reading to remember where we were as a nation, and a human rights community, just four years ago. Meanwhile, despite its historical inaccuracies,  the show's final message is not about Alexander Hamilton himself, but about the power, collectively and individually, to write our own stories and the story of the nation going forward. If ever there was a time to seize that power, it's now.

I knew something was up when a policeman ushered me away from a cordoned off entrance to the Richard Rodgers Theater. But then again, this was Hamilton, and the presence of celebrities and politicians in the audience is almost a common occurrence. So it wasn’t quite a surprise when the woman in the seat in front of me told me the Vice President was attending the show. How great to watch the show with Joe Biden, I thought, glancing around the theater to see if I could spot him. That’s when Mike Pence walked in.

I bought our tickets to see Hamilton back in January.  My daughter’s friend Alicia, a self-proclaimed theater geek had introduced us to the show.   Alicia is Chinese-American, like me, and has written eloquently about what Hamilton means to children of immigrants, who are Americans but are often made to feel we are not part of our own country.  Our family listened to the soundtrack non-stop.  We were entranced by the story of the imperfect founding father, “a bastard, orphan, son of a whore.”  We loved the history and patriotism, the focus on the promise of America in a story centered on immigrants, African-Americans and women.  It made us feel that we were part of the narrative.

Then the election happened.

When Mike Pence walked in, there was a mix of applause and jeers.  I stood silent, annoyed that Pence was going to ruin yet another thing for me.  As the show went on, I’ll admit that it was cathartic to cheer with fellow New Yorkers when Angelica Schuyler sang we “hold these truths to be self-evident/that all men are created equal/and when I meet Thomas Jefferson/I’m gonna compel him to include women in the sequel.”  And again when Hamilton and Lafayette proclaim “Immigrants: we get the job done.”  Towards the end of the first act, King George comes on stage to warn the newly freed colonists how hard it is to rule, singing “when your people say they hate you, don't come crawling back to me.”  Cheers were so loud that the actor, Rory O’Malley, had to stop singing.

During the intermission, my daughter speculated that Pence might skip the second act.  Even though I’ve written to criticize Pence’s policies in Indiana and am truly scared about his agenda for the country, I found myself hoping that he would stay. I actually wanted him to see Hamilton.  Hamilton is a beautiful play created by a diverse cast and crew.  It represents a vision of America and American values that is important for the Trump/Pence administration to hear.

After the play, Donald Trump tweeted that the cast should apologize. The theater should be a special place, he said, calling the cast “rude” to Mike Pence, “a good man.”  Like many others, I question the hypocrisy of essentially asking for a safe space for the future vice president, when Trump and his supporters mock the need for such spaces for young people and minorities on college campuses.  However, I agree that as a country, we need to create spaces for dialogue and theater should be one of them.

But Hamilton’s cast and crew have absolutely nothing to apologize for.  They performed a wonderful, inspiring, and thought provoking show.  Rather than allowing Pence to sneak out after being jeered by the audience, the cast asked Pence to stay, urging the crowd to refrain from boos.  The crew welcomed the Vice-President Elect and thanked him for attending the show. They also expressed a fear that many of us feel: that the new administration will not protect us. Brandon Victor Dixon, the actor who plays Aaron Burr, closed by saying he hoped that the story told by a diverse group of men and women of different colors, creeds and orientations would help to inspire Pence to uphold our inalienable rights and to work on behalf of all of us to uphold American values.  I can’t think of anything more American than that. 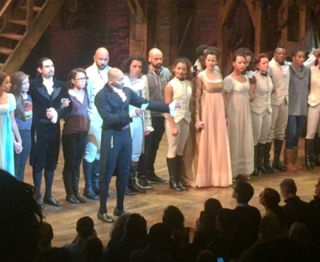