The Irony of Asian-American Month

Prof. Ho writes this two-part post on the Asian American experience in the time of COVID-19 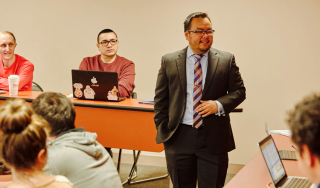 Last December, while I was searching for plane tickets for March spring break, the thought never crossed my mind that my one-week trip to visit family in my hometown just east of Los Angeles, would be extended indefinitely deep into the spring—and now likely summer—months.  At the time, I couldn’t imagine that we would all succumb to the effects of a significant virus; the world had not yet circulated the name “Covid-19”.  But very swiftly, the pandemic has made the catastrophic commonplace.  None of us have been immune to such physical and psychological terrors that have accompanied this health crisis.

The other thought that had not cross my mind last December was when, where, and how as an Asian-American, would I experience my next incident of racial hatred.  I know it’s coming.  It could be a confrontation and an epithet—tossed while I’m out in public when this is all over, catching me in a moment of surprise.  That sort of thing has happened before.  Or it could be a more subtle form of social denial or discrimination, where the perniciousness of the act is clearer only in hindsight.  There could also be violence involved.  Or it could be a combination of all these different types of hatred.  And it could happen more than just once.  All I know is that no immunity exists for such horror-laden moments.  Once the public health crisis arose, the number of racially motivated attacks on Asians both in the U.S. and globally also rose.  I’m expecting my turn.

How swiftly the narrative has shifted for Asians and Asian-Americans in the U.S.from the dominant status quo’s regard as model minority citizens back so suddenly to yellow peril.  In my hometown just east of Pasadena, California where I grew up and have spent these months quarantining with family, the Asian-American population here has grown radically across the last four decades.  In the early 1980s, I was only one of three Asian-American children in my elementary school classroom, but by the time I graduated high school in the same town, Asian-American students comprised of more than 50% of the student population.  Today, my old high school counts Asian-Americans as nearly 70% of its students.  We are the majority—so much so that there is even a separate Chinese-American parents booster club.  Where the old Ralphs Supermarket used to be, a giant H-Mart Korean market now sells the most exotic (but mundane to us) Asian groceries.  In town, there are two outposts of the legendary Din Tai Fung Restaurant, the Taiwanese eatery famous among international foodies for its soup dumplings.  A handful of Asian banks dot the town’s business districts, and our city hall’s website has translated versions in traditional and simplified Chinese, in Korean, and in Spanish.  Take your pick.  Back before the health crisis had us quarantining, my retired parents never had to speak a word of English when they stepped out of the house to run errands.  And even in our time of safer-at-home, the Chinese language newspaper still delivers to our door every morning.

My hometown is one of several cities in the San Gabriel Valley that have seen an Asian-American immigration boom.  But even so, when I take walks in my old neighborhood of quiet post-War single-family homes and I pass by white neighbors, I find that the practice of social distancing is both a practice of safety and suspicion.  It’s as if any social or political capital that’s been built on the material progress of Asian-Americans in our town has seemingly crumbled.  Every time I take my parents’ car out for its bi-weekly run and drive by the Santa Anita Race Track, a famous historical fixture in town that still hold professional horse-betting today, I recall that it was used as a Japanese-American detention facility during World War II.  And I’ve been reminded of this fact, especially so, while it’s been Asian-American Heritage Month these last several weeks.

In Albert Camus’ The Plague, an extremely apt and salient novel to read (or re-read) during our pandemic, Camus demonstrates the human tendency to make meaning out of a natural world that has no concern for meaning.  In The Plague and other works, Camus associated this tendency with what he called “absurdism” because invariably, as he believed, the world defies meaning and is indifferent to our humanist struggle to make our lives and the world meaningful.  Contrary to the sound of the word, “absurdism,” to our ears, Camus does not judge our constant endeavors to search for meaning in life as a deficiency.  But rather, as seen in The Plague, it’s the type of meaningful response that we have when there’s an unexpected crisis, like a city-wide plague or a global pandemic, that matters for judgment.  In The Plague, the disease that unexpectedly asserts itself over the sleepy Algerian town of Oran prompts quarantine and then causes widespread suffering and death.  The plague is first interpreted by a Catholic priest in the novel as an outcome of human sin of the town’s inhabitants.  The plague is moralized and made meaningful in terms of blame.