In These Times - Who Are We? What Is Justice? 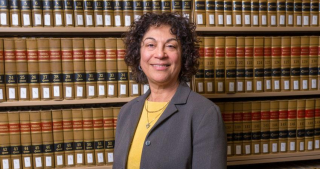 An editorial in The Boston Globe in late February lamented the “mid-case deportations” that ICE has been conducting in Massachusetts and presumably elsewhere.  Rather than allow the state’s criminal justice system to “do its job” by conducting trials in cases involving serious charges against immigrants already found deportable, ICE has been swooping in and deporting them. It’s unclear from the article whether the Globe editors were more concerned by the failure to provide “justice” for the crime victims, which they frequently referenced, or by the unfairness of these deportations to the accused immigration detainees.

While I of course deplore the acts these crimes involved, as an immigration lawyer and advocate I am deeply disturbed by ICE’s systematic and ongoing attacks on the Massachusetts judicial system.  The Globe editors referred to their hope that the federal courts will address and contain these actions. However, given what we’ve seen recently, it is unclear whether the federal government, acting through ICE, would even abide by a federal ruling.  To me, that is the most alarming issue behind these ICE moves.

There is already sufficient evidence that our judicial system has become severely compromised, that lack of adherence to the rules of precedent, and even of procedure, threaten to take down this third branch of government that helps to avoid lawlessness.  If thwarting of court rulings, currently on the upswing, becomes the norm, it is a small step to “take the law into our own hands” when we have grievances against one another.

A case out of the Seventh Circuit highlights the creeping lawlessness in our judiciary.  In Baez-Saenz v. Barr (947 F.3d 1033 (7th Cir. 2020)), the Court chastised the Board of Immigration Appeals (BIA), the administrative appellate court for immigration cases, for flouting its remand instructions.  The case involved a Mexican national who appealed the BIA’s denial of his request for a waiver while he sought a U visa (crime victim protection) from the DHS. The Court remanded the case, but on remand, the BIA defied the Appeals Court.  Following Mr. Baez-Saenz’s second appeal to the Seventh Circuit, Judge Easterbrook wrote:

“We have never before encountered defiance of a remand order, and we hope never to see it again. Members of the Board must count themselves lucky that Baez-Sanchez has not asked us to hold (at 1035) them in contempt, with all the consequences that possibility entails. …  Yet it should not be necessary to remind the Board, all of whose members are lawyers, that the “judicial Power” under Article III of the Constitution is one to make conclusive decisions, not subject to disapproval or revision by another branch of government. …. We acted under a statutory grant of authority to review the Board’s decisions.  … Once we reached a conclusion, both the Constitution and the statute required the Board to implement it.   … The Attorney General, the Secretary, and the Board are free to maintain …      that our decision is mistaken—… But they are not free to disregard our mandate in the very case making the decision. … The Solicitor General did not ask the Supreme Court to review our decision, and the Department of Justice is bound by it.

The Attorney General’s brief … asks us to remand so that the Board may “address … whether an immigration judge may adjudicate an application for a nonimmigrant waiver … in removal proceedings.” The request is bizarre. We have already held that immigration judges do possess this power …. We directed the Board to consider whether the power has been transferred by statute, regulation, or reorganization plan to the Secretary of Homeland Security. The Board chose not to address that question, and we are hardly going to remand so that the Board can write another opinion about whether we erred in construing  8 C.F.R. sec. 1003.10(a). That’s water under the bridge. … we held that the regulation is unambiguous. An agency is entitled to reinterpret an ambiguous regulation, …, but cannot rewrite an unambiguous one through the guise of interpretation. Change requires rulemaking.

The only remaining question is what should happen next. After concluding that an administrative decision is flawed, a court of appeals normally must remand to the agency. …. Yet we have already remanded, only to be met by obduracy. The remand rule is designed to afford the agency an opportunity (at 1036) to have its say on an issue,… The Board had that opportunity and disdained it. Another remand would do little beside give the Board a free pass for its effrontery, while delaying the alien’s entitlement to a final decision. … Baez-Sanchez has waited long enough. ...  The petition for review is granted, and the Board’s decision is vacated. This leaves the immigration judge’s decision in force. The Executive Branch must honor that decision, ….” (at 1037) (emphasis supplied)

More recently, a former Hawaii state judge, James Dannenberg, resigned from the Supreme Court bar because of his lost faith in the Court.  In a letter to Chief Justice John Roberts, the Judge explained his decision:

“... You are doing far more – and far worse – than “calling balls and strikes.”  Your are allowing the Court to become an “errand boy” for an administration that has little respect for the rule of law …  It is clear to me that your Court is willfully hurtling back to the cruel days of Lochner and even Plessy. The only constitutional freedoms ultimately recognized may soon be limited to those useful to wealthy, Republican, White, straight, Christian, and armed males— and the corporations they control. This is wrong. Period. This is not America."