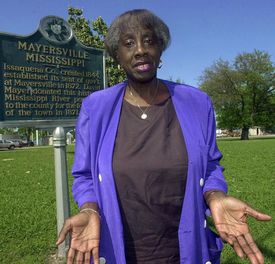 Unita Blackwell passed on Monday at the age of 86.  Born in the Mississippi Delta during the depression of sharecropper parents.  She was forced to leave school at age 12 to work as a farm laborer.  She moved to Arkansas at a young age because there blacks were permitted to attend school. She returned to Mississippi when the civil rights movement began to make inroads. Eventually, Ms. Blackwell became the first black woman elected as mayor in Mississippi, but her activism and public service started much earlier.

At the same time, Ms. Blackwell was a member of the Mississippi Freedom Democratic Party.  The party challenged the seating of Mississippi's all-white delegation at the 1964 Democratic convention.  In 1965 Ms. Blackwell sued the county in which she resided for suspending 300 students who wore pins supporting civil rights.  In 1967 she testified at senatorial hearings held in Jackson on the extreme poverty experienced by rural blacks.  She testified that there were "children in the county who had never had a glass of milk."

Armed with a GED, Ms. Blackwell was accepted into a program a regional planning program at the University of Massachusetts, Amherst from which she earned her master's degree in 1983.

During her tenure as mayor of Mayersville, from 1976-2001, she developed water and sewerage services,  saw that roads were paved and worked to improve housing.  From 1990-1992 she was president of the National Conference of Black Mayors.     Mayor Blackwell received a MacArthur genius grant for her work on water services and housing, and from 1991-1992 she was a fellow at the Harvard's Kennedy School of Government.  She became an advisor to several US presidents.

“I was put into the position of learning to survive, someway and somehow, by being black and in this country, Blackwell said in a 1977 oral history interview with the University of Southern Mississippi obtained by Mississippi Today. But also being black and in this country, you learn a great lesson, and this is how to overcome. … It’s that power to move in the midst of opposition.”