The Institute, along with the City of Birmingham, has done a good job of owning its past.  The Institute does not shy away from the civil rights history and the city's response.   Among its many exhibits is one replicating the jail cell where Dr. King wrote "Letter from a Birmingham Jail".  The setting provides a powerful place to read the letter, which is part of the exhibit.    Across from the Institute is Kelly Park, where demonstrators were hosed by firemen and attacked by police dogs.  Again, the city does not shy from its history.  Bronze exhibits in the park replicate attacking dogs and firemen with hoses.

So it was not surprising when the Birmingham Civil Rights Institute announced that Dr. Angela Davis would be the recipient of the Fred Shuttlesworth Human Rights Award. 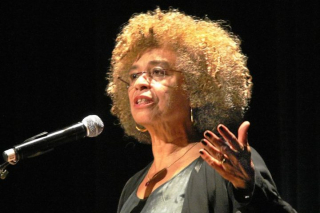 Angela Davis hails from Birmingham.  The civil and human rights leader is remembered for her activism against racist practices during the 1970s.   During that era, she was a member of an African American chapter of the Communist Party and supported the Black Panthers and a target of the FBI.   She spent 18 months in prison on accomplice to murder charges involving the death of a judge, a charge from which she was acquitted. A Ph.D. whose activism has sometimes made her academic life difficult, she teaches at the University of California at Santa Clara where she continues to write and work on human rights issues.  One of her recent works is Freedom is a Constant Struggle:  Ferguson, Palestine and the Foundations of a Movement.  She is known as a respected human rights activist who carried on her activism to ensure fundamental human rights.

Then the Institute rescinded the award, stating that Dr. Davis did not meet the criteria. The Institute had received a letter from the Birmingham Holocaust Education Center asking for reconsideration of the award based upon Dr. Davis'  support of Palestinians.  Jewish Voice for Peace published an open letter to the Institute, signed by over 350 academics, calling on them to cancel the rescission.

The counter-pressure was intense.  Three Institute board members resigned.  The Mayor joined in criticizing the recission decision and the City Council swiftly passed a resolution supporting Dr. Davis.  The Institute acknowledged receiving criticism from several community groups. In the meantime, community leaders, including clergy and business people, arranged an alternative Birmingham event at which Dr. Davis spoke to an overflowing crowd.

The Institute re-extended the award to Dr. Davis and published a letter stating that no decision should have been made regarding rescission before a discussion with diverse groups.  Also, it said that it was keeping with its commitment to learning from its mistakes.  Unknown is whether Dr. Davis accepted or will accept the Shuttlesworth Award.