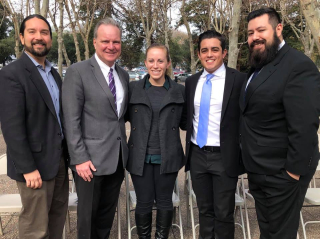 At a minimum, the resolution challenges and rejects the divisive narrative coming from the Trump administration. It presents a counter narrative that is rooted in the official recognition of the inherent dignity and equality of all human beings. It highlights the county’s role in welcoming immigrants, refugees, and people of diverse identities, abilities, religions, opinions, and status. It defines the role of government as a vehicle for the promotion and realization of the rights mentioned in the Universal Declaration of Human Rights.

The resolution’s importance lies not only in its substance, but also in its reach. Santa Clara is the 6th most populous county in the U.S., with a population of 1.8 million people. It is also home to some of the largest and most influential businesses in the world, including Apple, Google, eBay, and Yahoo!

This resolution is a next step in a broader strategy aimed at the recognition and implementation by local governments of internationally recognized human rights. In December of 2016, Mountain View passed a resolution to become a Human Rights City. It is now in the process of implementing a pilot program that seeks to apply a human rights lens to city projects. In December of 2017, the County of Santa Clara passed an ordinance aimed at implementing CEDAW locally. Consequently, the County created a CEDAW Task Force and, with the assistance of the International Human Rights Clinic at Santa Clara Law, the county is about to publish a report that addresses homelessness through a gender and human rights lens, and is in the process of implementing the report’s recommendations. On December 10th, 2018 the county celebrated Human Rights Day with a public panel discussion about human rights with the heads of the following five executive county offices: Immigrant Relations, LGBTQ Affairs, Labor Standards and Enforcement, Cultural Competency, and Women’s Policy. Students from Santa Clara Law and San Jose State also discussed their local human rights work.

Next on the agenda is the publication of a periodic joint report between the county and the community that will evaluate the county’s overall human rights work, including in the area of business and human rights.

We are lucky to have great political leadership at all levels of local government that is willing to push forward with this progressive agenda and seeks to solidify the application of a human rights framework throughout all government operations.

WHEREAS, recognition of the inherent dignity and of the equal and inalienable rights of all members of the human family is the foundation of freedom, justice, and peace in the world; and

WHEREAS, all human beings are entitled to rights and freedoms without distinction on any basis, including race, color, creed, sex, gender and gender identity, sexual orientation, abilities, socioeconomic status, marital or partnership status, immigration status, language, religion, political or other opinion, national or social origin, property, birth, or other status; and

WHEREAS, on December 10, 1948, the General Assembly of the United Nations approved the Universal Declaration of Human Rights as a common standard of achievement for all peoples and all nations to promote universal respect for and observance of human rights and fundamental freedoms; and

WHEREAS, the Declaration calls upon “every individual and every organ of society” to “strive by teaching and education to promote respect for these rights and freedoms and by progressive measures … to secure their universal and effective recognition and observance”; and

WHEREAS, the Declaration embodies the values that define us as a people, the ideals that challenge us to perfect our union, and the liberties that generations of Americans have fought to preserve at home and abroad; and

WHEREAS, as Eleanor Roosevelt said, universal human rights begin “in small places, close to home,” and “unless these rights have meaning there, they have little meaning anywhere. Without concerted action to uphold them close to home, we shall look in vain for progress in the larger world”; and

WHEREAS, the principles set forth in the Universal Declaration of Human Rights guide the spirit of our laws, practices, and policies carried out with and on behalf of the residents of Santa Clara County; and

WHEREAS, Santa Clara County can be a model for our country and for the world as a Human Rights County—a county where we welcome persons of all races and ethnicities, including persons who recently arrived or have lived in this country for generations; where refugees and their American-born children are welcome; where women can feel safe walking alone, where people feel comfortable practicing the religion of their choice; where transgender persons are made visible and respected, where LGBTQI residents can live openly and freely, where all residents are an equal part of our diverse tapestry, and where anyone who wishes to live in acceptance of others can find refuge; and

WHEREAS, the County of Santa Clara can be a leader among other counties in the promotion of human rights and human dignity, because it recognizes the fundamental principle that “[a]ll human beings are born free and equal in dignity and rights” and that “[t]hey are endowed with reason and conscience and should act towards one another in a spirit of brotherhood”; and

WHEREAS, the County of Santa Clara has made great efforts to implement human rights principles in the establishment of the Division of Equity and Social Justice housing, the Offices of Cultural Competency, Immigrant Relations, LGBTQ Affairs, and Women’s Policy; and

WHEREAS, the Human Relations Commission of the County of Santa Clara was established in 1972 based on the spirit of the Declaration to advise the Board of Supervisors on human rights issues in the county and to promote respect for diversity and inclusion of all people; and,

WHEREAS, Human Rights Day celebrates a milestone in our commitment to uphold the inherent dignity and worth of every person, honors the legacy of a historic document that helps ensure that its ideals endure for the generations to come, and reminds us of our roots as one human family, forever dedicated to upholding the central tenets of the Universal Declaration of Human Rights.

NOW, THEREFORE, BE IT RESOLVED, that the Board of Supervisors of the County of Santa Clara, State of California, hereby designates December 10, 2018, and December 10 of each succeeding year as Human Rights Day; and,

BE IT FURTHER RESOLVED, that the Board of Supervisors hereby declares this county a “Human Rights County” that explicitly embraces the principles of inclusion, respect, involvement, and the recognition of equality, freedom, and human dignity for all.