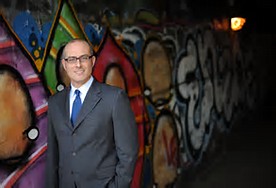 All parents share one thing in common. Whatever our differences – across race, religion, socio-economic status, political beliefs, and more – every parent wants the best for their children. We disagree on a lot these days, but I haven’t heard a single parent wish that their children will do worse than they did.

Now consider this ambitious vision proclaimed almost thirty years ago: Every child in the world “should grow up in a family environment, in an atmosphere of happiness, love and understanding” and be raised “in the spirit of peace, dignity, tolerance, freedom, equality and solidarity.” This ideal reflects what all of us would want for our children, for all children. After all, no parent hopes their children will suffer misery, war, and inequality.

This grand vision was announced in the UN Convention on the Rights of the Child (CRC). Adopted in 1989, the CRC was the first comprehensive human rights treaty on children. It established a holistic framework for ensuring the rights and well-being of all children. The CRC covers both civil and political rights (such as freedom from cruel, inhuman and degrading treatment) and economic, social, and cultural rights (such as the right to education). It also includes rights unique to children (such as the right to know and be cared for by one’s parents).

Given the universal appeal of its goals, it won’t be surprising to hear that it’s the most widely-accepted human rights treaty in history. Every country in the world has ratified the CRC, except the United States.

In the United States, the CRC has become a victim of much broader political and ideological battles, a phenomenon that too often tragically happens to children themselves. Highly charged rhetoric masks the reality of the CRC and children’s rights more broadly—that is, the fulfillment of children’s rights is consistent with what the vast majority of parents want for their kids. They want their children to have access to health care and education, to be free to observe their faith without government interference, to live without discrimination, and to grow up without suffering violence or exploitation.

But given the shared values in what parents dream of and what the CRC mandates for children, the idea of children’s rights remains relevant in the United States. We don’t have to wait passively for government to act; we can take action, guided by children’s rights values.

So, for Universal Children's Day (November 20) or any day thereafter, here are three steps each of us can take to forge common ground and improve the lives of children:

1.  Read the CRC. Whether it is the CRC’s declaration that the family is “the fundamental group of society,” the  19  provisions of the CRC that recognize the vital role of parents              and the family in the lives of children, the treaty’s  support for education, its prohibition on torturing children, or something else, find an element of the CRC that             resonates with your values as a parent, family member, American, or human being.

2.  Find and support (financially or as a volunteer) an organization in your community that advances an aspect of the  CRC that you support.

3.  Vote for kids. And not just on election day. Make your voice heard often, by urging your representatives to support initiatives that help secure the rights and well-being of             children.

If we all can do that, then this Universal Children’s Day can be a turning point, a day when we found common ground on which to build a world where every child can develop to its full potential.

Children, Convention of the Rights of Children | Permalink