Women’s Rights on the Move: Coming to a City Near You! 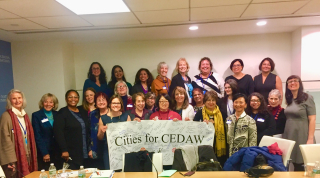 A number of recent and exciting developments in the local implementation of the Convention on the Elimination of All Forms of Discrimination against Women (CEDAW) have occurred over the past year.  There are now 9 ordinances in place, and 28 city, county and state governments have adopted CEDAW resolutions. There is also growing momentum of women’s rights movements around the country, including the #MeToo and #TimesUp movements, as well as the ongoing work evidenced by women’s marches and other groups demanding accountability.
To  build upon this energy, and continue the momentum, the Columbia Law School Human Rights Institute and the Leadership Conference on Civil and Human Rights convened a CEDAW strategy session on the margins of the 2018 UN Commission on the Status of Women (CSW) in New York.  This meeting was a unique chance for advocates from around the country to collaborate, share lessons learned, and support each other in efforts to operationalize CEDAW at the local level. Representatives from CEDAW advocacy groups, local government, and academia, representing over 20 cities and counties were present, from Portland to Pittsburgh and Denver to Durham, and many places in between.
To ensure that advocates across the country can continue to raise awareness of what CEDAW entails and how it can be useful in the local context, the meeting convenors developed user-friendly materials that include a two-pager that distills the basic provisions of CEDAW, as well as a plain language guide to all of the General Recommendations from the CEDAW Committee, reflecting interpretations of the treaty.  These materials are available on the Cities for CEDAW website, along with more in-depth guidance for implementing CEDAW locally.
A number of new local initiatives were highlighted at the meeting.  For example, a California state CEDAW resolution passed in February 2018. While it does not have a binding effect on municipalities or counties in the state, it is the first resolution of its kind at the state level and is an important expression for support for CEDAW.  The resolved clause contains some robust and positive language:  “Adherence to the principles of the CEDAW on the state level will especially promote equal access to and equity in health care, employment, economic development, and educational opportunities for women and girls and will also address the continuing and critical problems of violence against women and girls.”  It also highlights that the Legislature supports  .. CEDAW … by addressing discrimination against women and girls in areas including, but not limited to, economic development, education, employment practices, violence against women and girls, and health care…”
Lest you think that CEDAW is only gaining traction in those jurisdictions typically considered “progressive,” like California, there have been recent developments in a range of places.  Rapid City, South Dakota’s City Council passed a CEDAW resolution in early March 2018.  Advocates there emphasized CEDAW as a positive accomplishment that raises the profile of the city nationally and globally. Resolutions were also passed in Columbia, South Carolina and two related ordinances were passed in Cincinnati, Ohio.
Local governments, too, continue to recognize the power of CEDAW. The International Association of Official Human Rights Agencies (IAOHRA) adopted a Gender Equity Resolution at its 2017 annual conference. Through the resolution, IAOHRA urged support for municipal, county, and state  efforts to “advance gender equity and promote and affirm principles of CEDAW.” IAOHRA also resolved to assist its member agencies in supporting local CEDAW and gender equity initiatives. This is particularly notable since IAOHRA is an association of over 150 state and local statutory civil and human rights and human relations agencies all over the United States, and in Canada.
If any local groups need support, materials or information about how to implement CEDAW in your area, join the Cities for CEDAW Coalition here.