I feel certain that everyone who worked with Janet Benshoof over the years has a story about it.  Here's mine.

Back in 1986 or so, I was an associate at a large NYC law firm.  At the time, Janet was heading up the ACLU Reproductive Freedom Project.  As I recall, she arranged to hold a reproductive rights law training session at the NYC Bar Association, and one of our firm partners lined up a group of associates to attend.  I don't remember what sorts of legal issues 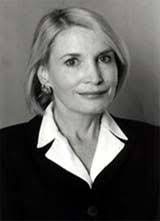 we were learning about exactly, but what stuck with me was something that Janet said near the end of the training.

Standing in front of our group, she said, "we need to bring out the crazies."

What?  At that moment, she seemed a little crazy herself.  What was she talking about?

When we all looked at her blankly, she explained.  Basically, she said, we should craft our arguments so that they give the other side an opportunity to show how crazy they are.  Let them reveal themselves.  Bring out the crazies!

I'm sure she gave us an example, but I don't remember it.  I do remember thinking about these words many times over the years.  Most recently, they came to mind when I worked with the Raoul Wallenberg Institute on a report on access to water and sanitation for Roma residents of Sweden.  When our report came out, a spokesperson for the Swedish government protested that there was no obligation to provide water to Swedish residents.  The government took this position in Sweden, no less.  I thought to myself, yes, we've brought out the crazies!

Janet has left us all a rich legacy in her life's work to make the world a better place, particularly through the institutions that she built to carry on her work.  Part of that legacy, what we can continue to remember and draw inspiration from, was her boldness.

Lawyers concerned about human rights and women's rights will need all of that we can muster.  The fight goes on, and the postscript to my story shows how difficult progress is.  The same NYC firm that sponsored associates to go to Janet Benshoof's reproductive rights law training in 1986 now has a policy against taking on abortion-related cases as pro bono matters.   Hmmm.  What would Janet do?