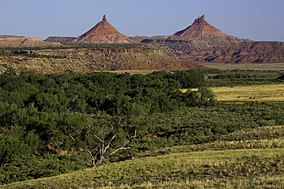 Ears by 85 percent and the Grand Staircase-Escalante by roughly half. The reduction, totaling two million acres, represents the biggest rollback of federal designated land protection in U.S. history. The Bears Ears monument is home to an estimated 100,000 Native American archeological and sacred sites. President Obama designated Bears Ears in 2016, while the Grand Staircase-Escalante was protected by President Clinton in 1996, both under the Antiquities Act, a 1906 law that allows presidents to unilaterally set aside public lands to protect “objects of historic and scientific interest.” In contrast, National Parks are designated by acts of Congress.

The announcement came a week after Trump sparked controversy during a ceremony honoring World War II veteran Navajo code talkers by reviving his feud with Senator Elizabeth Warren, indirectly referring to her as “Pocahontas,” an intended slur that offended the families of the code talkers. Critics also questioned the optics of holding the ceremony against the backdrop of a portrait of Andrew Jackson, whose bloody enforcement of the Indian Removal Act caused thousands of Native American deaths.

Hours after the announcement, opponents hit back. A coalition of five Native American tribes - Hopi, Navajo Nation, Ute Mountain Ute Tribe, Pueblo of Zuni and Ute Indian- filed suit to block the move. According to Native American Rights Fund (NARF) attorney Matthew Campbell, “Bears Ears is one of the most important places for Indian Country, and that is why Indian Country came together to advocate for this important place. Trump’s attack on Bears Ears is an attack on all of us, and we will fight to protect it.” The tribes argue that the Antiquities Act allows a president to designate but not to revoke monument status, and that Trump has exceeded his authority by curtailing the monuments so sharply that he has in effect eliminated their protections. Trump’s move is not unprecedented – previous presidents have made much smaller reductions, but their right to do has never been tested in court. The move bodes ill for Trump’s respect for Native sovereignty. As NARF points out, “This latest action follows on the heels of the Administration’s other actions against Tribes: (1) issuing the permit to the Dakota Access Pipeline, (2) issuing the permit to the Keystone XL, and (3) revoking the Executive Order to protect the Bering Sea on April 28th. Tribes vigorously opposed all of these efforts. The Administration uses the term “tribal sovereignty” but clearly does not understand what that means.”

The same day, Earthjustice filed suit on behalf of a group of environmental and conservation organizations, including the Wilderness Society, the Natural Resources Defense Council, the Sierra Club and seven others, claiming that the decision to shrink the size of Grand Staircase-Escalante was unlawful. “While past presidents have used the Antiquities Act to protect unique lands and cultural sites in America, Trump is instead mangling the law, opening this national monument to coal mining instead of protecting its scientific, historic, and wild heritage,” said Earthjustice’s attorney Heidi McIntosh.

The outcome of the litigation will have far-reaching implications for the preservation of natural resources, including whether the designation of national monument status will be rendered effectively meaningless if it can be easily reversed by subsequent administrations. In making the announcement, Trump said “public lands will once again be for public use.” But as NARF’s Executive Director John Echohawk sees it, the reality is that the lands will provide private benefits instead, with potentially damaging environmental and cultural consequences. He said “It is clear that Trump’s attack on Bears Ears is motivated by his desire to undo decisions made by his predecessor, but also to grant political favors to the Utah politicians who would see our sacred lands plundered for short-term economic gain that could come from drilling for oil and mining for uranium.”