Editor's Note:  Guest blogger Kate Kelly attended hearings last week at the Inter-American Commission on Human Rights.  In this Human Rights Day blog, she reports on police killings in the US.  Ms. Kelly is a legal fellow at Columbia's Human Rights Institute.

Gone are the days where many considered international human rights law to be too esoteric, or irrelevant to the American context. A heightened concern for protection of basic rights has led to a renewed elevation of concerns at the global level. Just this Tuesday, dozens of mayors from the U.S. joined with city leaders from around the world to sign their own climate pact, the “Chicago Charter,” as a response to President Trump’s withdrawal from the Paris Agreement.  Also this week, a wide array of civil society groups and local governments have engaged with  the UN special rapporteur on extreme poverty and human rights, Philip Alston, as he kicked off his two week visit to the United States.

Despite these examples, which are increasing, the federal government’s approach to international and regional human rights treaties and mechanisms has largely been one of exceptionalism. The U.S. relationship to the Inter-American Human Rights Commission (IACHR), punctuates this point. While the Commission is seated in our nation’s capital, the U.S. helped to create the Inter-American Human Rights System, the United States has yet to ratify the main legal agreement that governs the system, the American Convention.  In honor of its obligations as a member of the Organization of American States (OAS), the U.S. has typically participated in hearings and cases to address human rights concerns. Though, as was highlighted here in March, the U.S. was conspicuously absent from the IACHR hearings at the start of the new administration.

The U.S., however, did participate in a series of IACHR hearings on Thursday. Federal officials, primarily from the State Department, attended hearings on topics including the crisis in Puerto Rico, and labor rights in the automotive industry.  One hearing, requested by the ACLU, Santa Clara University International Human Rights Clinic and Robert F. Kennedy Human Rights, put a spotlight on police brutality and police murders of black and brown citizens, invoking the international language of extrajudicial killings.

U.S. activists and advocates have long framed the murders of black Americans at the hands of police in international human rights terms.  For example, in 2014, the parents of Mike Brown, Lesley McSpadden and Michael Brown Sr. spoke to the United Nations Committee Against Torture, pleading for “global intervention” to address their son’s death. Explaining this violence in terms of “extra judicial killings” builds on this legacy, highlights the epidemic of police brutality, and reinforces that the murders at the hands of police lack legal sanction. It can be especially powerful in a forum with unique experience addressing extra judicial killings in other countries in the region, like the IACHR.

Extrajudicial killings are, by definition, homicides carried out by state actors absent valid legal proceedings or adequate due process of law.  Based on protections for the right to life, and security of person, human rights law prohibits governments from arbitrarily depriving their citizens of life.  (This obligation springs from Article 3 of the Universal Declaration of Human Rights, Article 6 of the International Covenant on Civil and Political Rights, and Article 4 of the American Convention).

States are required to act to prevent, investigate, punish and provide compensation for human rights violations. However, States often disregard their duty to prosecute the state actors, typically police or military officers, for extrajudicial killings. The U.S. is not immune to this pattern of impunity.  Mapping Police Violence has found that in only 1% of cases of police violence that occurred in 2015 has there been any individual officer accountability.

A groundswell of attention to the murders of unarmed black Americans by police has grown out of tireless work of the Black Live Matter movement, and other grassroots groups around 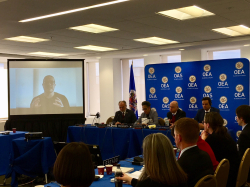 the country. New media racial justice activists like Shaun King have been pivotal to the increased visibility of the scope of impunity -- King first addressed the epidemic of police violence as “extra judicial killings” in 2015.  King’s powerful testimony kicked off yesterday’s IACHR hearing on this topic, highlighting the unwarranted deaths of many, including Rekia Boyd, a 22-year-old African-American woman, who was fatally shot in the back on March 21, 2012, in Chicago, Illinois by an off-duty police officer.

The hearing was also a moment for impacted families to speak, including Luis Poot Pat, Cousin of Luis Góngora Pat who was killed by police in San Francisco, CA, and Maria Hamilton, the mother of Dontre Hamilton who was killed by police in Milwaukee, WI.  Ms. Hamilton, who founded Mothers for Justice United, testified that her family waited for 18 months for a review by the Justice Department (DOJ) of her son’s murder. Even after the review was complete, the officer responsible was not charged. Mrs. Hamilton urged the Commission to take action, including a visit to the U.S. to learn more about this issue, and develop strong recommendations.

The ACLU Human Rights Program highlighted that just in 2017 alone, at least 903 people have already been shot and killed by law enforcement officers, including more than 300 who were fleeing from officers when they were shot. Jennifer Turner of the ACLU urged the federal and state governments to conduct prompt and thorough reviews of extra judicial killings by police, provide urgent compensation to victims’ families, among other recommendations.

At the conclusion of the hearing, Commissioner Margarette May Macaulay, Special Rapporteur for the United States, articulated that police brutality is also a problem in her home country of Jamaica. She urged the U.S. to establish independent review mechanisms for crimes by police, outside of the normal prosecutorial system, as they have recently instituted in Jamaica. She also encouraged the United States to improve training, provide full reparations to victims, as well as address the issue of wide access to firearms.

U.S. representative Genevieve Libonati committed to report back to the Commission on the steps the government will continue to take to fulfill its obligation to protect the right to life of all Americans. She likewise conceded that “the US human rights record, like all countries, is imperfect.”

Commissioner José de Jesús Orozco Henríquez concluded the IACHR hearing by stating, “Ending impunity is the best guarantee to stopping repetition of these crimes against citizens.”  The Inter-American Commission is vital to keeping the spotlight on the United States efforts to end impunity, and we must continue to ensure that the IACHR, and other human rights bodies have accurate data and information on human rights concerns, so that we can continue to insist on human rights accountability. Robust engagement of both civil society and the U.S. media with these international mechanisms will help strengthen both accountability and respect for international human rights.

I'm being systematically shredded and destroyed by Community Oriented Policing, They've done every horrible imaginable thing to my family and I and the law enforcement agencies won't lift a finger to help me. It's all over inheritance issues and me being a black sheep, from an Exclusive all Government Family, please please help !