Academic Freedom: Use It Or Lose It 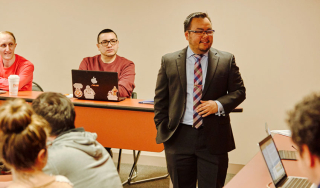 Earlier this month, I was invited to speak on a panel at the Northeast People of Color / CAPALF Conference at Brooklyn Law School.  Before I had gotten involved, the panel was already curiously titled, “True Grit:  Academic Freedom, Campus Activism, and the Corporate University.”  My co-presenters were Christian Sundquist, Anthony Farley, and Peter Halewood—all terrific faculty members from Albany Law.  We each shared our variations on a theme regarding academic freedom, particularly in the privatization of universities.  As summer is upon us and as many of us in the academy do our writing at this time, I thought it could be pertinent to underscore a few points from that talk in terms of upholding academic freedom in this raucous political and legal period in our present history and its implications for us in the academy on human rights at home (and abroad).

In a Los Angeles Times article this week, a White House spokesperson noted the disinterest in “abstract notions of human rights” that this current presidency harbors above other social and political agendas. (Link to full article here.)  The White House might not show much interest in upholding broader human rights narratives but that does not make the normative and philosophic goals of human rights any less important.  Particularly in this age of giant narrative shifting, our continued critique of the stories, viewpoints, and rhetoric that are trying to engage the American public to think differently, for better or worse, is essential.  Our critique relies on our freedom in the academy to make extramural utterances.  In my view, the more we use it meaningfully and responsibly, the more we sustain it from encroachment.

As our national narrative is being shifted away from cultural pluralism and democracy toward nationalism, subordination, and authoritarianism, academia has an institutional place to judge that narrative.  The plot-line for narrative shifting is usually three-fold:  First, those perpetuating the narrative change find a base or a critical mass of followers on a particular issue to whom they begin to foster a sense of frustration and alienation by striking up anger and hatred for that issue.  (Think for instance: illegal immigration as an existing hot button topic with already incendiary reactions prior to the 2016 elections.)   Then as anger and frustration is reignited, those perpetuating the narrative shifting start to exaggerate the dangers of that issue.  (Think: fake news articles, false statistics of illegal immigration, and stereotypical sentiments echoed nationally that illegals are criminals and rapists.)  And then once sentiments have been ramped up to a frenzy, the narrative shifting breaks into the offering of a drastic solution to appease that base.  (“Let’s build a wall and make Mexico pay for it.”)

In terms of critique, our role at universities is to point out the exaggeration in the narrative change—to repeatedly point to the truth through our capacity to engage and participate in extramural utterances that are backed by research, possibly revealed in moments of activism.  In part, as instructors and thinkers, this is our role:  to challenge the exaggeration.  Academic freedom fulfills our roles by providing us protections within the university.

From Black Lives Matter to sexual identity and orientation discrimination, from health care to economic inequality, from immigration bans to gender pay discrepancies—as long as those issues are being debated, there will be those who will dislocate “abstract notions of human rights” in each and every one of those issues in order to spin the rhetoric to a viewpoint that serves their hegemony and marginalize not just democracy—but people.  For every intriguing and complex articulation of a new or continuing thought regarding human dignity that can appear in each one of these aforementioned issues, there is another nuanced strategy on the theme of the Other that can detract from the truth about human rights.

But within the privatizing practices at many colleges and universities, there are erosions of academic freedom that are timing well in this political climate of narrative shifting.  The seemingly neoliberal focuses on the bottom line redirects the purpose of the university from education with critical knowledge as a public good in mind to applied knowledge that ensures post-grad marketability.  That potentially shrinks the scope of academic freedom in the traditional sense.  Because to some (such as Stanley Fish), our academic freedom must fit the contours of the job.  If we are just here to graduate our students so that they can brand themselves for employment, rather than also inculcating them to the resonance of adult life and public citizenry, then our academic freedom narrowly fits that and only that premise.  Stay within those contours and you’ll be a good citizen.  Cross over and you’ll be zapped.  Now this is not a view of academic freedom that I agree with because I think of critical knowledge and education as a common good and not a private entitlement is what the university is ultimately for.  But it’s not hard to think that those moving the wheels of corporatization in colleges and universities will try to shrink the scope of academic freedom because the extramural utterances reflecting critique no longer fits whatever corporate purpose of the university we’ve reached.  If that happens, then our role in judging new narratives is diminished because the erosion of academic freedom will render us unable to fully speak about the truth.

So for those academic colleagues who are writing, researching, or presenting on the topics that enlighten about human rights—whether in concrete or “abstract” notions, whether in discussions on certain social issues or otherwise—understand that your work is two-fold.  First, you are furthering the substantive ideas and solutions in those areas of law, society, and politics that are in the public courts of debate.  We definitely need that work at this time.  Secondly, you are exercising and (hopefully) maintaining the scope of academic freedom in a free and liberal society.  Thus, no matter how hard the work seems, note that there is a noble undercurrent in your early-morning, late-night, between child-care, seemingly-daunting, under deadline endeavors.

At the NEPOC/CAPALF panel, I suggested a further idea of protecting academic freedom in this age—which is to play up the importance and relevance of our research and activism to one of the important stakeholders in the corporatized university: our students.  The purpose would to be stoke a demand for our research and scholarship that would underscore critical knowledge as a public good.  Now, I’m still a bit skeptical about the narrower contours of this idea because it could possibly lead to a commodification of our academic freedom, which is dangerous and problematic and playing right back into the neoliberal practices of universities.  I’m still tinkering how it would play out.  That’s my project this summer.

But for now (and forever), keep writing!

And stay tuned for my next piece in July, which will offer part three of my series on civility.