Forced Marriage of Minors in the US - A Human Rights Issue

During a recent Boston demonstration against forced marriage of minors, word came that 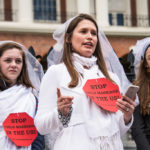 Governor Christie vetoed a bill overwhelmingly passed by the New Jersey legislature that would restrict marriage to those who are age 18 and older - no exceptions.  Among the reasons Christie cited for his veto was that the bill was contrary to some "religious customs".  Those religious customs are part of the silencing of females and undermining their autonomy.

Forced marriage is something Americans associate with foreign countries.  And when the topic is raised in the US, citizens associate the practice with some immigrant cultures.  While the practice may be more common with certain cultural and religious groups, forced marriage of children is not limited to those born outside of the United States.  "Shotgun" weddings have a long history in US Christian tradition and  resulted in no fewer forced marriages than other religions and cultures.

Unchained At Last was founded by Fraidy Reiss, herself a survivor of forced marriage.  Hers

was arranged in a conservative religious community and, like the majority of teen marriages, was to an older man who abused her.   After several years, Fraidy was able to escape the abusive marriage with her children.  She attended Rutgers University against her husband's demands and became an investigative journalist.   Fraidy graduated first in her class.  She recognizes that most women are limited in their ability to escape abusive forced marriages due to lack of "finances,  religious law and social customs."  She founded Unchained at Last to assist women in escaping from and resisting forced marriages.  Unchained is leading forced marriage prevention legislation demonstrations across the county

Representative Kay Khan and Senator Harriet Chandler filed a Massachusetts bill that would restrict marriage to those age 18 and older, without exception.  Parents would no longer have the ability to assent to a minor's marriage, judges would have no ability to waive the age requirement and pregnancy would no longer provide justification for underage marriage.  Currently in Massachusetts, there is no minimum age for children to marry with judicial and parental consent.