Special Rapporteur on Violence Against Women,  Dubravka Simonovic, spoke about global concerns of increased risks to women as fundamentalism and "populism" rise around the 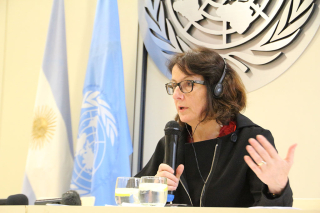 globe.    A group of UN human rights experts including Simonovic, Alda Facio, Chairperson-Rapporteur of the Working Group on the issue of discrimination against women in law and in practice; and Michel Forst, Special Rapporteur on the situation of human rights defenders, issued a joint statement expressing the concerns of many women around the globe.

“In the face of rising populism and fundamentalisms and deplorable setbacks on the women's human rights agenda, we need more than ever to unite our forces to preserve the democratic space in which women human rights defenders represent an essential counter-power and a colossal force of action.”

"The experts highlighted a host of specific challenges faced by women rights defenders – including misogynistic attitudes, threats of sexual assault, travel bans, lack of protection and access to justice, imprisonment, killings, laws which violate their rights, gender-based defamation questioning their “femininity” or sexuality, and gender stereotyping which questions their engagement in public life instead of sticking to their caretaker role in the family."

US women recognize the fragility of their advances in the post-Trump climate.

What supports the concerns of US women is the fact that there has been no general outcry from men denouncing the wave of misogyny that has let lose since the Trump campaign began.  If men are not willing to risk the ridicule of other men by taking a public stand against misogyny, how can women be safe? Particularly silent are the men of Congress.  Are all too busy worrying about how to get along with the incoming president? Or they are concerned with how to retain their seats and have Trump's support.  This is no time for cowards to represent us.  But bravery has not been a hallmark of many of our male representatives for some time.  The few vocal male congressional supporters are insufficient to create change. There was some hope when Republican leadership publicly stated they could not support Trump because of his videotaped remarks. But that assessment seems to have diminished in the race to preserve their status.  Respecting and accepting the process is very different from silence in the face of bias.