The UN Guiding Principles on Business & Human Rights at 5:  Marking and Measuring Progress

In June of 2011, the UN Human Rights Council endorsed a set of global standards to articulate and operationalize the tripartite human right based "respect, protect, and remedy" framework to prevent and address human rights violations that result from business operations.   These UN Guiding Principles on Business and Human Rights (“The Ruggie Principles”) constitute the first comprehensive guidelines that define the state duty to protect against human rights abuses, the corporate responsibility to respect human rights, and the right to access effective remedies  when human rights abuses do occur.

While the adoption of the Principles was surely a step in the right direction, they were criticized by some human rights advocates, including Human Rights Watch, early on as setting too low a bar for corporations.  This criticism raised concerns about three core aspects of the Principles.  First, that the standards themselves do not mirror what human rights require in terms of accountability and remedies.  Second, because the Principles are voluntary, they lack the requisite carrot and stick to ensure compliance.  Third, the rules do little to address the reality that there is often a massive power imbalance between multinational corporations that commit (or turn a blind eye towards) rights violations and the countries in which they operate.

Last week saw the five year anniversary of the Guiding Principles, and happily, they have led to some positive action.  There has been an uptick in the number of companies developing publicly available human rights statements.  Volvo Group and  Caterpillar are among the hundreds of companies that have developed a statement of policy on human rights, in line with Guiding Principle 16.  Several companies, including Adidas and Barrick Gold have also set up remedy mechanisms, though their effectiveness is a subject of fierce disagreement between advocates and the companies themselves.   And, as we know, corporate human rights abuses continue to wreak havoc in communities around the world, with the tragedies of Rana Plaza in India and the deaths at Marikana mine in South Africa as just two examples.

Of course, no one said progress would be easy.  Yet what is laudable is that the Business & Human Rights Resource Centre used the 5 year anniversary to capture both the trends and challenges in implementing the Principles, and to highlight opportunities to make progress moving forward.  This effort includes accessible infographics for each pillar of the Guiding Principles:  the state duty to protect human rights; the corporate responsibility to respect human rights, and the individual’s right to a remedy.  Stakeholder reflections on key benefits and challenges are also available on the Centre’s website.  The 5th anniversary of the Guiding Principles offers an important moment to reflect on what has been accomplished and what is left to be done.  While there is certainly more of the latter than the former, marking progress has served as an opportunity to breathe new life into the focus on improving compliance with human rights in the corporate context.

Indeed, on the eve of the 5th anniversary, a coalition of global businesses announced a new initiative to measure and report on corporate respect for human rights and increase transparency around how the top 500 globally listed companies measure up in terms of “human rights policy, process and performance” through the Corporate Human Rights Benchmark.  The ranking system is illustrated here: 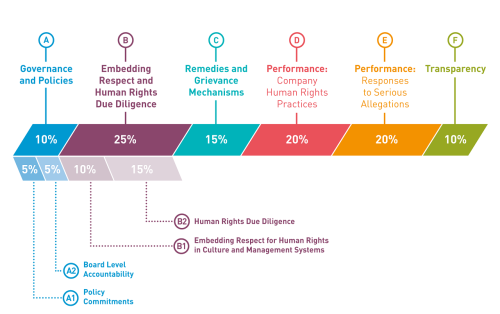 The indicators, which are admittedly limited in scope, were rolled out over the past year and shared with an array of stakeholders around the world.   The Corporate Human Rights Benchmark as a whole, though, was developed in large part by private sector investment entities and funded by the UK and Dutch governments.  So while there was broader stakeholder engagement,  the primary drivers are businesses and governments,  who have vested interests  in the outcomes (to say the least).   Indeed, just a bit of cursory research uncovered concerns that the baseline indicators are inconsistent with the international human rights framework, and the focus on companies’ commitments, rather than outcomes fails to capture the true human rights impacts and costs of doing business.  Undoubtedly, as the first reviews are completed, further critiques will emerge.

Nevertheless, this new Corporate Human Rights Benchmark can be viewed as a positive step.  The metrics are meant to serve as the carrot to incentivize further progress in promoting and protecting human rights.  As the Chair of Ben & Jerry’s Board of Directors noted, the Benchmark “should drive a change in corporate behavior.   This performance ranking is built on what the companies do rather than their rhetoric.  Those who truly support and deliver on high labor, environmental and human rights standards will be recognized and those that do not will have their records exposed to investors, customers, civil society, and home governments.  The expectation is that this ranking system will drive a race to the top and a competition to benefit people, the planet, and the bottom line.”

2016 will serve as a pilot year for the Benchmark, and 100 publicly listed companies have been selected for review, based on publicly available data.  A large subset of these companies are based in the United States, including extractives, as well as more familiar retail outfits, such as Costco, Target, Coach, the Gap and Under Armour.  The full list of companies is available here.   It remains to be seen what level of rigor will be applied to the benchmarking process but this is surely something to watch.

Even if it the progress made to implement the UN Guiding Principles since 2011 is imperfect, it is noteworthy.   The next five years will offer us a more nuanced understanding of how the commitments made on paper play out in corporate practice.  It will also offer new insights into how U.S. companies operationalize human rights and respond to evaluations framed in human rights terms.

(As a notable aside, Ben & Jerry’s has been a target of the Migrant Justice Milk with Dignity Campaign, which is fighting to secure rights for migrant dairy workers, and signed a commitment to work with Migrant Justice last year).