It has been evident that within the last century, dignity has become a leveraging point for advancing challenges to human rights violations and restrictions within the law. Its post-Enlightenment, fundamental universality replaced previous versions of humanity and has been regarded as a normative individual entitlement.  In addition, the broadness of its meaning and application allows different social movements to carve out particular nuances between the status quo and desired norms.  Thus, dignity is a normative.

Even before Obergefell v. Hodges, the anti-gay rhetoric that stole dignity away from sexual minorities for decades was a way in which the denial of their civil rights was justifiable under the law.  As others such as Martha Nussbaum have recounted (see Nussbaum, From Disgust to Humanity: Sexual Orientation & Constitutional Law 2010), 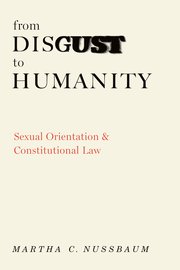 challenges fought in court and state legislatures over gay rights in the past were lost by gay litigants and gay rights advocates partly because the dominant rhetoric against sexual minorities was couched within the politics of disrespect—that, for instance, gays were living in a lifestyle premised on a morally-blameworthy choice or they were susceptible to illnesses or that they practiced sexually-deviant, perverse acts.

To some waning degree, that rhetoric of disrespect still remains and are still being used by opponents of gay rights and marriage equality. But for the most part, we’ve moved toward recognizing that dignity exists in sexual preferences and away from a politics of disrespect.  But a good question to ask in the recent shadow of Obergefell is whether the dignity recognized by the Court specifically accorded sexual minorities the respect that they should be entitled to for being who they are or whether the dignity rhetoric in Obergefell stopped short of this view and settled for addressing the respectability of choices of same-sex couples for wanting to participate in marriage.  The nuance seems slight but in the age where we recognize micro-aggressions and find assimilationist politics confining, the use of dignity to leverage rights by characterizing it between respectability of choices that a sub-group engages in to fit into the dominant culture (e.g. same-sex couples trying to obtain marriages) is a significant distinction from using dignity to accord the respect that a sub-group deserves based on identity alone.

As we begin 2016 and progress (hopefully) toward nondiscrimination for sexual minorities, respect certainly seems like the winning route to take when it comes to using dignity to speak about elevating the status of sexual minorities to a protected class—whether judicially or legislatively. Respectability, in comparison, has the potential to elongate a conversation where LGBTQ individuals are considered as “the other.”  Dignity as respect reframes the discussion away from choices and existence in a way that deprives the dominant culture opportunities to comment, and instead, places the subgroup in a light where such type of judgment is not allowed.