Delinquent by Reason of Poverty

In mid-November, an 8-year-old boy in Birmingham, Alabama, was charged with the murder of a 1-year-old girl named Kelci Lewis. The authorities announced that late on October 10, the girl’s mother and a friend had left six children, none older than 8, at the home unsupervised. They believe that the boy had “recklessly” and “viciously” beaten the toddler when she would not stop crying. The case will be heard in Jefferson County Family Court and can result in a disposition that includes long-term court supervision of the boy and confinement in a secure facility until age 21. Katerra M. Lewis, Kelsi’s 26-year-old mother, has been charged with manslaughter.

In Alabama, there is no minimum age at which children may be prosecuted in juvenile court. Criminal cases can only be transferred from family court to adult criminal court when the defendant is at least 14 at the time the alleged offense occurred. Therefore, the options available to the district attorney’s office in this instance are to prosecute the boy in family court or not to charge him at all. 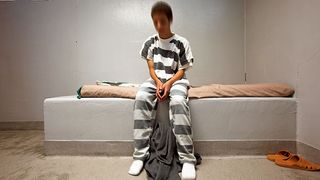 The jurisdictional limits in North Carolina, where I teach and practice, are similar: the minimum age for juvenile court prosecution is 6, and juveniles must be at least 13 to be eligible for transfer to criminal court.

What could possibly justify bringing a murder charge against an 8-year-old child, who in many states is presumed not to have capacity to form criminal intent or to understand court proceedings? Lara M. Alvis, a former juvenile court prosecutor from neighboring Shelby County, Alabama, has explained, “They either had to say ‘we’re not going to charge’ or ‘we are going to charge,’ and once they say they’re not, that’s going to be a huge problem, because then the child won’t get any services by the state.”

This notion that certain families must be directed into the juvenile justice system in order to “help” the youth and facilitate services, accountability, and discipline is a common misperception.

In 2013, U.S. courts with juvenile jurisdiction handled 1.1 million delinquency cases. Nearly 18% were dismissed at intake and an additional 27% were handled informally, with the juvenile agreeing to some type of voluntary sanction, such as community service or restitution. In 55%, authorities filed a petition and handled the case formally, as they are doing in Birmingham.

In North Carolina, the numbers of cases that were dismissed or handled informally in 2013 were even lower than the national average – only 38.5% of the 158, 973 juvenile court complaints received did not result in formal charges.

In other words, police officers, prosecutors, probation officers, and judges make decisions that cumulatively ensure that more than half of the children enter and remain in the juvenile court system, while the rest are diverted out of it or manage to avoid it altogether. Research shows that the race and ethnicity of the child partially explains this result, as the rate at which black youth in the U.S. were referred to juvenile courts for a delinquency offense in 2013 was more than twice the rate for white youth.

The role of the child’s socioeconomic status has received less attention, although jurisdictions that formally keep track of the income-level of a youth’s family have found that nearly 80% of those in juvenile court were on public assistance or had annual incomes of less than $30,000.

My own research has confirmed that the assumption that court involvement is the best way for poor children and their families to access needed services merely perpetuates a cycle of disadvantage, creating a permanent underclass and contributing to mass incarceration.

This concept, which I call needs-based delinquency, is rooted in the early history of the juvenile court when the focus was on the needs of destitute youth. The founders of the juvenile court were part of a nineteenth century movement that helped elevate the status of children from that of property to a dependent class in need of protection by the state.
In 1825, reformers established the New York House of Refuge, which provided food, shelter, and education to homeless and impoverished youth, many of whom were children of recent immigrants. They made few distinctions between children who were paupers and those who committed crimes and viewed poverty and crime to be virtually synonymous. As legal historian Sanford Fox wrote in 1970, “Unattended pauperism was thought to ripen into criminality, and uncontrolled criminality—particularly vagrancy, beggary and minor thefts—swelled the ranks of paupers who had to be supported in public institutions.” The reformers of this era conceived of both of these conditions in moral terms. Philanthropists as well as public officials believed that immorality caused poverty and that the poor, by virtue of their socioeconomic status, posed a threat to lawful society.
Needs-based delinquency continues to be perpetuated through the structure and culture of the modern juvenile court, beginning with the most common points of entry into delinquency court—the child welfare system, public schools, retail stores, and neighborhood police presence. In all of these forums, typical adolescent behavior of children from poor families is more likely to be criminalized and result in court referrals than misconduct by children from families of means.
The insidious phenomenon is further sustained via juvenile code provisions and court practices as well as the individual perceptions and biases of system actors. For instance, the legislation that governs juvenile court practice in each state commonly contains provisions that explicitly call for consideration of a child’s needs and the family’s socioeconomic status. Also, court policies give decision-makers wide discretion to consider these factors at critical stages of the case.
As a result, there are two explicit tracks that exist in the juvenile justice system: one for middle- and upper-class families who are able to secure private services for their children, such as mental health counseling and drug or alcohol treatment, and the other for low-income (often minority and single-parent) families who can most readily access these resources through a court order following a juvenile delinquency adjudication.

In this way, at each stage of the process, the court gives as much or more weight to the perceived “needs” of the child than to the strength of the evidence against her or to the propriety and rationality of pursuing a criminal prosecution, as in the case of a 8-year-old boy charged with murder.
This phenomenon is particularly troubling given research indicating that when children are processed through the juvenile court system and adjudicated delinquent, the impact is not benign—even when the disposition is arguably beneficial. Potential negative consequences of juvenile delinquency adjudications implicate such areas as housing, education, immigration, and employment as well as enhanced penalties for future offenses. Further, longitudinal studies show that children exposed to juvenile court reoffend at higher rates and are stigmatized in the process.

This concern over stigma draws on sociological literature on labeling theory, the concept that attaching a label to a behavior creates further “deviance.” Once the label of juvenile delinquent is formally imposed, it is readily accepted by both the child and the community, and the child is defined and perceived by others through the lens of this label. Community members, police officers, teachers, and potential employers then interact with and judge the child according to that description.
With the increasing awareness of the income gap and how it affects the most vulnerable among us—poor children and their families—we know that children who grow up in poverty are likely to remain poor. We know that language deficits exist in poorer homes and that gaps in school achievement between higher-income and lower-income students have become chasms. We know that poverty impacts the physical health of children—from obesity and diabetes to asthma and heart disease. We know that toxic stress can develop in young children, caused by exposed to stress hormones, such as cortisol and norepinephrine. We know that this level of stress may actually reset neurological and hormonal systems, permanently impacting children’s brains and even their genes.

We also know that when young people perceive court procedures to be unfair, they reoffend at higher rates. We know that detention, even for short periods of time, can be damaging to a child’s emotional well-being and that it exposes young people to the risk of assault. We know that reducing the rate of juvenile incarceration does not increase juvenile crime or violence. And we know that the number of cases that are referred to the juvenile court system approximates the same percentage of youth who have been found to grow out of delinquent behavior through typical adolescent development without any court intervention.

Yet, we continue to use the juvenile court system as the primary safety net for poor children and their families. We allow those children with the most needs—emotional, physical, and behavioral—to be fast-tracked through an indiscriminate intake system. We watch passively as they are saddled with the stigma of juvenile delinquency adjudications and are often warehoused for months or years in juvenile detention facilities.

The 8-year-old boy in Birmingham, Alabama, may sound familiar to you. He may remind you of a friend’s child or a young neighbor. He may even resemble your own son or your younger self. Imagine if he were from a family of means with two college-educated parents who were both gainfully employed. Imagine he had access to therapists and tutors. Picture him living in a well-tended home in a suburban neighborhood. Would this have made a difference to the Jefferson County district attorney’s office? To the Birmingham Police?

Adjudicating children delinquent by reason of poverty is a counterproductive approach. All of our children deserve better.