By: Alexandra Tate and Elise Meyer 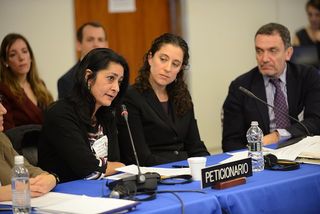 Alexandra Tate and Elise Meyer are law students in the University of Chicago Law School International Human Rights Clinic, supervised by Human Rights at Home Contributing Editor, Professor Caroline Bettinger-Lopez. In part one of this discussion, Tate and Meyer discuss the background to the October, 2014 hearing held at the Inter-American Commission on Human Rights in the Lenahan Matter.  They write:

Large-scale responses to domestic violence have been all over the news lately. Whether it’s related to the NFL, campus sexual assault, or a recent hearing at the Inter-American Commission on Human Rights (IACHR), domestic violence is in the spotlight. While the NFL and campus sex assault focus on the role large and oftentimes non-governmental institutions play in perpetuating domestic violence, the IACHR’s October 2014 hearing on Jessica Lenahan (Gonzales) v. United States prompts us to think about our government’s role at the federal and state levels. While the hearing saw some positive developments—such as the U.S. government showing greater openness to the Commission’s review of alleged human rights violations in the U.S.—it also demonstrated the U.S. government’s reluctance to think expansively about how to overcome challenges posed by federalism in addressing problems relating to domestic violence in Colorado.

In 1999, Jessica Lenahan’s three young daughters were abducted by her estranged husband and killed after the Castle Rock, Colorado police refused to enforce a restraining order against him. Ms. Lenahan filed a suit in federal court in Colorado against the Town of Castle Rock, alleging that the police department’s failure to respond to her complaints of restraining order violations, resulting in the deaths of her three daughters, violated her constitutional right to due process. The case made it all the way up to the Supreme Court but was dismissed after Justice Scalia, writing for the court, held that, despite a mandatory arrest statute and a message on the back of the restraining order that ordered police officers to arrest restrained persons, the enforcement of a restraining order was not mandatory under Colorado law.

Having exhausted domestic remedies, Ms. Lenahan brought her case to the international arena, specifically the IACHR (a tribunal in which individuals can bring complaints against countries in the Americas). Ms. Lenahan is the first domestic violence victim to bring a case against the U.S. before an international human rights tribunal. In 2011, the IACHR found that the U.S. had violated the human rights Ms. Lenahan and those of her three daughters. Specifically, the IACHR found that the U.S. had discriminated against Ms. Lenahan and did not provide equal protection to her and her daughters by failing to act with due diligence to protect them from domestic violence. The IACHR recommended that the U.S. conduct an investigation into the cause of the daughters’ deaths and enact comprehensive reforms to protect domestic violence victims across the U.S. Fifteen years after the abduction, no independent investigation into the cause her daughters’ deaths has been conducted. Although the IACHR’s decision is arguably legally binding, there is no body to carry out its enforcement.

See Monday's Post for details on the US failure to provide human rights remedies.

While the Lenahan’s case, Gonzalez vs. USA, 2011 and more recently Gonzalez Carreno vs. Spain, 2014 (http://www.womenslinkworldwide.org/wlw/new.php?modo=detalle_proyectos&dc=62)
are important jurisprudence in the recognition of DV as a human rights violation, it is imperative that govts. start recognizing the extent to which ‘extensive’ and ‘systematic’ gender-bias and discrimination against women by lawyers & judges are responsible for the lack of protection, re-victimization, and violation of rights of victims within family courts.