After hundreds of years of experiencing human rights violations, the Onendaga Nation has filed a complaint with the Inter- American Human Rights Commission. 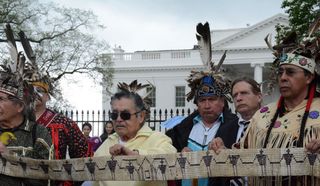 The Onedaga Nation has sued the state of New York and the federal government in the Inter-American Commission of Human Rights.  The tribe’s petition was filed on April 15th after the tribe was unsuccessful in requesting that the US Supreme Court hear its appeal of lower courts' dismissal of its suit alleging violations of the treaties with the Nation.  One of the claims in the Inter-American petition is the pollution of Onendaga Lake.

According to the Onedaga Nation's website, the complaint opens with the following language:

"The Onondaga People wish to bring about a healing between themselves and all others who live in this region that has been the homeland of the Onondaga Nation since the dawn of time. The Nation and its people have a unique spiritual, cultural, and historic relationship with the land, which is embodied in Gayanashagowa, the Great Law of Peace. This relationship goes far beyond federal and state legal concepts of ownership, possession or legal rights. The people are one with the land, and consider themselves stewards of it. It is the duty of the Nation’s leaders to work for a healing of this land, to protect it, and to pass it on to future generations. The Onondaga Nation brings this action on behalf of its people in the hope that it may hasten the process of reconciliation and bring lasting justice, peace, and respect among all who inhabit the area."

Jeanne Shenandoah, communications officer with the Onendaga Nation, stated that the lake “… has been extremely environmentally damaged and we have been having different negotiations and meetings going on for years, hoping to have this lake cleaned [until] it’s not toxic anymore”.  Onendaga Creek is polluted, as well.  “Both of these waterways hold very strong spiritual attachments for us,” she added, “These two places have very strong spiritual meaning to our people, and they have been extremely degraded by some multi-national corporations that have come along and have caused the entire shore line to be damaged and toxic.”

Even though the state of New York has ordered clean up the waterways, the New York state standards are much lower than standards than the Nation.

2.5 million acres from Pennsylvania to Canada once belonged to the Onenendaga Nation.  The tribe has attempted to reclaim the land for preservation purposes but has been unsuccessful.  The US Supreme Court denied the tribe’s petition for cert this past  October. Joe Heath, the Nation’s attorney, presented the tribe’s claims to the Inter-American Commission on Human Rights, having exhausted all recourse in the courts of the United States.

“Our access to basic equality and justice was fundamentally denied by the United States’ courts,” said Tadodaho Sid Hill of the Onondaga Nation. “Now, we’re calling on the international community to help us reach a healing process following centuries of violations and broken promises.”