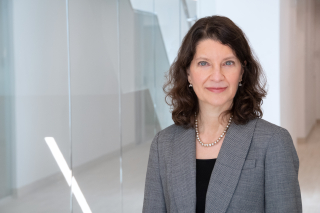 Sharona Hoffman, JD, LLM, SJD, is the Edgar A. Hahn Professor of Law and is the Co-Director of The Law-Medicine Center at the Case Western Reserve University School of Law. She is also a Professor in the Department of Bioethics at the Case Western Reserve University School of Medicine.  She teaches Health Law courses, Employment Discrimination, and Civil Procedure and was voted First Year Teacher of the Year in 2011, 2012, and 2019. She also served as Associate Dean for Academic Affairs from 2006 until 2009 and won the 2014 Distinguished Teacher Award.

Dr. Hoffman received her B.A. from Wellesley College, her J.D. from Harvard Law School, an LL.M. in health law from the University of Houston, and an S.J.D. in health law from Case Western Reserve University. Prior to becoming an academic, she was a Senior Trial Attorney at the Equal Employment Opportunity Commission in Houston, a litigation associate at O'Melveny & Myers in Los Angeles, and a judicial clerk for U.S. District Judge Douglas W. Hillman (Western District of Michigan).

In 2013, Professor Hoffman was selected by the Robert Wood Johnson Foundation for a scholar-in-residence fellowship in public health law. She has also twice spent a sabbatical semester as a Visiting Scholar at the Centers for Disease Control and Prevention (2007 and 2014) and was a Visiting Scholar at Emory University in 2014 as well. Dr. Hoffman was elected to membership in the American Law Institute in 2017.

Professor Hoffman has published over sixty articles and book chapters on health law and civil rights issues. She has developed particular expertise and a national reputation in the area of health information technology. Her work has appeared in the Georgetown Law Journal, William & Mary Law Review, and Boston College Law Review, among many other journals. She is the author of two books: Aging with a Plan: How a Little Thought Today Can Vastly Improve Your Tomorrow (Praeger 2015) and Electronic Health Records and Medical Big Data: Law and Policy (Cambridge University Press 2016). Professor Hoffman has lectured throughout the United States and internationally and has been widely quoted in the press.

More information is available at sharonahoffman.com.