One of my fun little Christmas presents was the Gruber/Newquist/Schreiber comic book guide Health Care Reform: What It Is, Why It's Necessary, How It Works.   It's wonderfully illustrated and has a lot of good information.  It offers a very hopeful vision of what health reform can do.  It patiently explains the politics and policy that led to the ACA, portraying it as a compromise that both "left and right" should be able to support.

Unfortunately, the authors have chosen to portray virtually anyone who opposes the ACA, on both left and right, as either angry, exasperated, selfish, or unreasonable.  (This animated penguin reminds me of several of the characters in the book.) There are also some questionable implications in various parts of the book.  For example, on p. 21, it's suggested that if employers didn't have to pay so much for health care, they'd just pay that in higher wages to employees.  But in an economy where corporate profits are capturing "88% of the growth in real national income while aggregate wages and salaries accounted for only slightly more than 1% of the growth in real national income," why should we assume that will happen? Workers' share of national income is declining; they have little bargaining power.  We can't extrapolate the economic projections of the "Great Moderation" era to today's Great Recession, where employers are exploiting the desperation caused by high unemployment to hold the line on wages and benefits.

One other objection: check out this graphic (my apologies for the poor camera-work), which suggests the deep problem in the US economy is that we're spending too little on military or homeland security expenditures, and too much on health care: 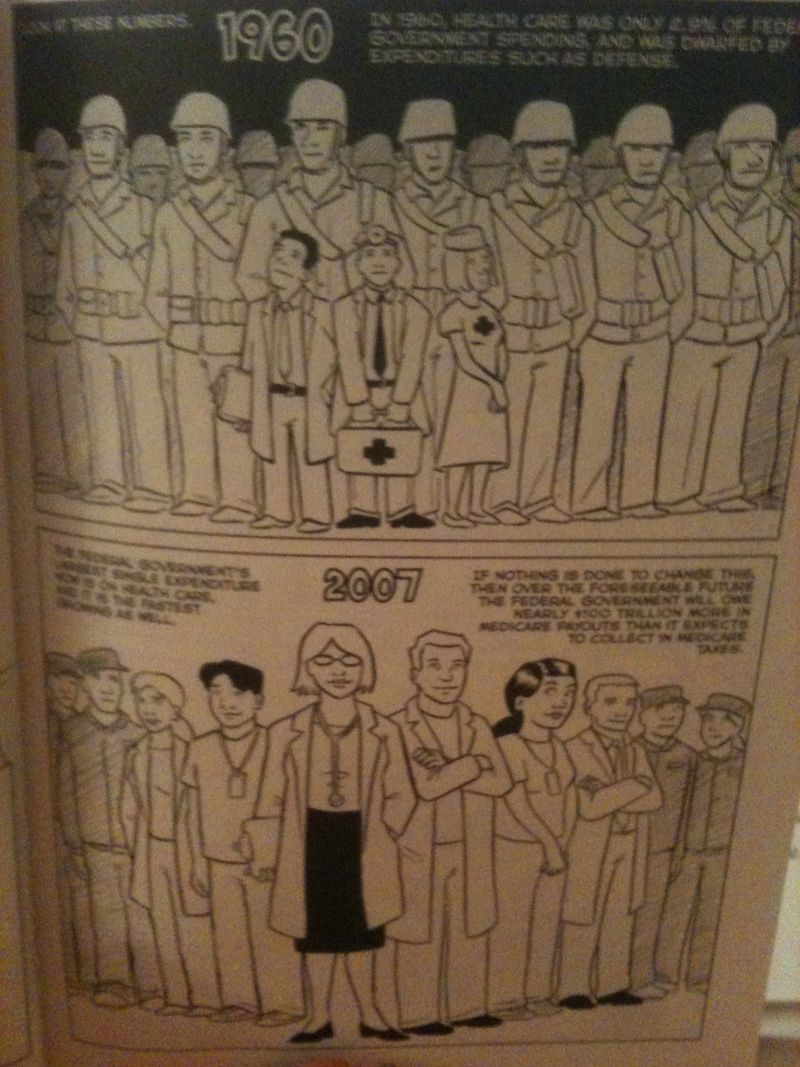 Again, I'm not saying our health care system is perfect, or that waste can't be eliminated.  All I'm asking is: isn't it a bit tone deaf to portray an economy that has poured trillions into foreign engagements, homeland security, and mass incarceration over the past decade as stinting on military and police forces?  Gruber is described on the book's back cover as "possibly [the Democratic] Party's most influential health-care expert."  If you want to understand why President Obama has done so little to seriously reduce Defense and Homeland Security expenditures, while investing so much effort into "bending the health care cost curve," take a look at this book. This graphic is perhaps as good a symbol as any of what DC's bipartisan technocratic elite thinks has gone wrong with the US over the past half-century.

Listed below are links to weblogs that reference The Nirvana Fallacy Among Health Care Cost Cutters: