Why Don't Beer, Wine and Alcohol Have Nutrition Fact Labels?

A flurry of articles published this week highlighting a long-time movement to mandate nutrition labeling on alcohol (hat tip to Doug Ray) raises the question, 'why don't beer, wine and alcohol have nutrition fact labels?' This question appears to be particularly germane in light of alcohol's high liquid calorie count and the current obesity crisis.

A look back through history may help to answer this question. After the end of prohibition, the period from 1920 to 1933 when alcohol could not be made, transported or sold in the United States, Congress passed the Federal Alcohol Administration Act of 1935 which is still in force. Instead of delegating the regulation of alcohol to the Food & Drug Administration, which regulates most consumer food and beverages and requires nutrition labeling, Congress recognized the tax potential of alcoholic beverages and assigned to the Treasury's Alcohol and Tobacco Tax and Trade Bureau (TTB) the role of regulating alcohol, including its labels. As Marion Nestle over at SFGate points out, adding the TTB to the regulatory mix means that, "as absurd as it may seem, the labeling rules differ for wine, beer and distilled spirits:"

- Substances to which people might be sensitive, such as sulfites and yellow No. 5, must be labeled.

-  Wines with less than 7 percent alcohol are regulated by the Food and Drug Administration, not TTB. They must display Nutrition Facts labels with calories, nutrients and actual ingredients. They may disclose percent alcohol, and some do.

However, this all may be changing. According to the blog Food in America

[m]ost notably, the provision in the Obama health care reform law that will require menu nutrition labeling at chain restaurants will also include alcoholic beverages. Baylen Linnekin at Crispy on the Outside reports that by March 2011 the FDA will issue proposed regulations requiring chain restaurants to disclose on nutrition information about menu items including alcoholic beverages. The required info will include total calories, fat, saturated fat, cholesterol, sodium, total carbohydrates, sugars, fiber and total protein. 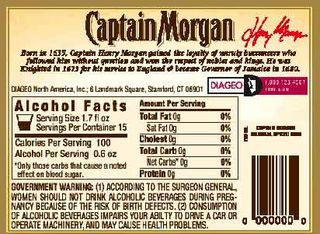 Another recent development with implications for alcohol nutrition labeling was the Alcohol and Tobacco Tax and Trade Bureau’s (TTB’s) determination in July 2008 that certain products commonly referred to as beer but produced without malted barley (e.g. beers made from sorghum, rice or wheat) do not qualify as malt beverages under the TTB’s enabling statute, and thus are not subject to TTB regulation. Per the terms of a memorandum of understanding between TTB and FDA, that means these products are instead subject to regulation by the FDA. What does that mean? Well, according to the FDA’s November 2010 guidance on the topic, that means these beers will be subject to the labeling requirements under the Federal Food, Drug, and Cosmetic Act (FFDCA) and the Fair Packaging and Labeling Act (FPLA). The specific guidelines are spelled out in the guidance document, but in brief the beers will be required to have nutrition facts and ingredients labels like those you already see on most hard cider.

These recent developments may be a signal that the TTB will finally be taking action on its Notice of Proposed Rule 73, published back in 2007, which proposes amending labeling regulations to require on all alcohol beverage labels (1) a statement of alcohol content expressed as a percentage of alcohol by volume, and (2) a Serving Facts panel including a statement of calories, carbohydrates, fat and protein. The example in PR 73 is as follows: 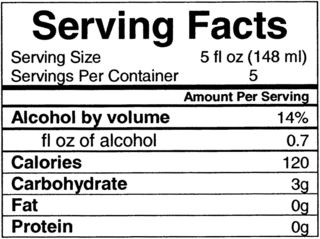 The five previous attempts at similar rule making, in 1974, 1979, 1980, 1985, 2005, were all unsuccessful. One of the dubious grounds for these failures was an argument by industry that putting a "nutrition" label on alcohol would deceive consumers into believing that alcohol is part of a nutritious diet. It is hoped that this type of paternalistic argument, that keeping calorie information from consumers is somehow in their best interest, will no longer be seen as persuasive, especially in light of the current obesity crisis.

Listed below are links to weblogs that reference Why Don't Beer, Wine and Alcohol Have Nutrition Fact Labels?: