The Mecca of Golf Welcomes Women 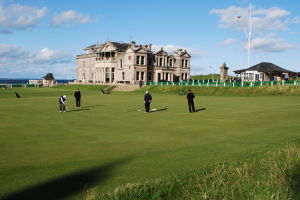 (photo of the Royal and Ancient Golf Club)

Golf, I've heard it said, began in Scotland.  And in Scotland, there is the Royal and Ancient Golf Club.  This Club is no mere club; it, along with the US Golf Association, creates the venerable Rules of Golf. The Club has also historically prohibited women from belonging to the club, even as honorary members.

“Members of The Royal and Ancient Golf Club of St. Andrews, the founding club of The R&A, will vote on a motion to admit women as members. The Club’s committees are strongly in favor of the rule change and are asking members to support it.”

What prompted the change of heart?  As usually the answer in such institutional matters, political pressure and fear of economic damage:

...there was a golf game-changer last year, when the controversy over all-male clubs hit the sports pages as the British Open was held at another men-only member club, Muirfield. First Minister of Scotland Alex Salmond refused to attend, declaring the male-only rule to be “indefensible in the 21st century.” Others thought so, too, as attendance at Muirfield dropped by 20,000 following Salmond’s personal boycott.

Mixed-Gender Basketball Association: Where Men and Women Team Up

Howard is now working full-time to put together an 8-to-10 team Mixed Gender Basketball league — 12 players to a team, all paid equally. The first teams will be based in the Northeast: Philadelphia, Delaware, New York and New Jersey. He says the season will tip off in July.

But with the WNBA and other leagues, there’s no shortage of ways to see women play pro ball. Why does Howard think fans will pay to see his games?

Howard’s a salesman who takes every chance to push the novelty of his concept. That includes the league’s logo, which depicts a woman scoring over a man.

The lawsuit was filed in October 2013 in federal court and alleged that the district’s all-male wrestling program discriminated against girls on the basis of sex in violation of the Equal Protection Clause of the 14th Amendment of the U.S. Constitution and the Equal Rights Amendment of the Pennsylvania Constitution. In January 2014, Flaster/Greenberg lawyer Abbe F. Fletman andWomen’s Law Project attorney Terry L. Fromson were successful in obtaining a preliminary injunction requiring the school district to allow seventh-grader Audriana Beattie to join the all-male wrestling program for the duration of the lawsuit.

The Court has now approved a consent decree entered into by the parties that will allow Ms. Beattie to remain on the previously all-male wrestling team and other young women who wrestle competitively may join the team.

The school district has also rescinded its policy that kept girls off boys’ teams and will not adopt any policy in the future that will unlawfully deny athletic opportunity on the basis of sex.

From NYT, Amid Cheers, Union Bid Stirs Concern for Women

Given the current state of college athletics, there seems more potential benefit than risk for women in the types of reform that might ripple from the Northwestern case, said Erin Buzuvis, a law professor at Western New England University and a co-founder of the Title IX Blog.

“Division I athletic programs have been bringing in increasingly more money, and it hasn’t been the case that opportunities for women have been getting better,” Buzuvis said. “In fact, we’ve been seeing the reverse, a backslide.”

In her view, the equal treatment requirement of Title IX would compel colleges to provide the same collectively bargained benefits to female athletes as male athletes, from extended health insurance to salaries. “Nothing that happened” so far in the Northwestern case “changed Title IX in any way,” Buzuvis said.

If it holds that athletes are employees, Title IX, which refers to access to education, may not apply, said Ellen J. Staurowsky, a professor of sports management at Drexel and an expert on Title IX and college sports reform....

But an overhaul of athletics could stop the pitting of football players and men’s basketball players against female athletes, Staurowsky of Drexel said.

“The system is not committed to equity on either side,” she said. “It denies the rights of athletes who should be recognized as workers, and it has also violated Title IX with impunity. I think this window of opportunity, in terms of truth telling and saying what this enterprise actually is, opens the door to make gains on both fronts if we acknowledge that neither front has been well served.”

Yay!  The Akron Women's Basketball Zips, MAC champions, are headed to the NCAA March Madness tournament for the first time.  (What is a zip, you ask?  First a rubber shoe, now a (girl) kangaroo.  "Fear the Roo.").  During this time of basketball frenzy, its the perfect time to ask the woman question - what is going on with women coaches.

In the Title IX success story, women’s opportunities in coaching jobs have not kept pace with the striking gains made by female athletes. Women’s share of jobs coaching female athletes has declined substantially in the years since the law was enacted, moving from more than 90% to below 43% today. As a case study, the situation of women coaches contains important lessons about the ability of discrimination law to promote social equality. This article highlights one feature of bias against women coaches — gender bias by female athletes — as a counter-paradigm that presents a challenge to the dominant frame of discrimination law.

The predominant legal model views discrimination as a top-down, inter-group phenomenon. In discrimination law, the paradigmatic case is intentional bias directed by an in-group superior toward an out-group subordinate. (E.g., a male boss discriminates against a female subordinate.) Shifting either one of these dimensions to involve within-group bias or contra-power bias complicates the discrimination claim, resulting in new doctrinal demands. Shifting them both creates space for productive theorizing about the complexity of discrimination and the adequacy of the law’s response to it.

The case of bias against women coaches is an especially interesting one because it turns upside-down both of the typical trajectories of the paradigm. Research has shown a troubling preference by female athletes for male coaches. To the extent that the hiring process takes into account athlete preferences, this resistance to having a female coach can make it harder for women coaches to get hired; it can also make it harder for women coaches to succeed once hired. Similar within-group, upstream biases have been found in literature on women in leadership, with many women in subordinate roles expressing ambivalence about women bosses and leaders. Exploring within-group, upstream bias as a form of discrimination sheds light on important issues of animus, essentialism, intersectionality and agency at the heart of discrimination law. This Article uses the phenomenon of bias by female athletes against women coaches as a case study for rethinking the promise and limits of discrimination as a tool for social equality.

On behalf of their son, [parents] challenge a policy which requires boys playing interscholastic basketball at the public high school in Greensburg, Indiana, to keep their hair cut short. The Haydens make two principal arguments: (1) the hair-length policy arbitrarily intrudes upon their son's liberty interest in choosing his own hair length, and thus violates his right to substantive due process, and (2) because the policy applies only to boys and not girls wishing to play basketball, the policy constitutes sex discrimination. The district court rejected both claims and granted judgment to the Hayden ex rel. A.H. v. Greensburg Cmty. Sch. Corp., 2013 WL 1001947 (S.D.Ind. Mar. 13, 2013). We reverse in part. Because the hair-length policy on its face treats boys and girls differently, and because the record tells us nothing about any comparable grooming standards applied to girls playing basketball, the evidence entitles the Haydens to judgment on their sex discrimination claims. 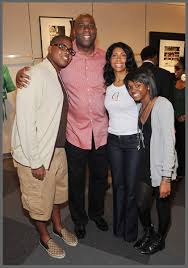 .....so spoke Magic Johnson, the greatest point guard in the history of the National Basketball Association, about his gay son, who has a boyfriend.  No commentary; I just thought it was a cool story about a dad embracing his gay son. .....thus runs a hypo posed by a column in Truth Wins Out, an LGBT website.  The author, Wayne Besen, worries that Martin would have been propelled from being "not black enough" to being "too black."

I agree that this may have been possible.  But who is to say?  There is something morally gratifying about a bullied kid getting some payback against his tormentor, not in a sadistic way but in a way that is just even if that justness is procured through a strong shove or a headlock.  So too much of manliness, frankly, doesn't rest on such crude dichotomies as Mr. Besen suggests:  either get bullied or fight back.  There are preemptive measures that boys (at least many boys) know about which can signal to the other party--without having to resort to violence--that  they are not to be messed with.

None of this is to say, of course, that Jonathan Martin deserved any of the abuse or that the monstrous Incognito should not be punished.....

Michael Sam, the All-American from the University of Missouri, is the first openly gay football player.  Some NFL teams have already supported his candidacy and it seems that the media is supporting him too.

On the other hand, as you probably know, the NFL doesn't seem to be a hospitable place for cultural differences, as suggested by the ordeals suffered by Jonathan Martin.

This conflict between the gentleman and the brute, which I've examined elsewhere, seems never ending.....

.....are legal.  According to the Telegraph UK:

Gender change operations are legal in Iran according to a fatwa - or religious ruling - pronounced by the late Ayatollah Ruhollah Khomeini, spiritual leader of the 1979 Islamic revolution. The law contrasts with the strict rules governing sexual morality under the country's Sharia legal code, which forbids homosexuality and pre-marital sex.

The article is about football (what Americans call soccer) but the news is still arresting, to me, anyway.

In honor of the Olympics, Why We Love Watching Female Figure Skaters, but not Female Basketball Players.  The story picks up with the Russian men’s ski jump coach Alexander Arefyev comment that he doesn’t like seeing women compete in the sport because they “have another purpose—to have children, to do housework, to create hearth and home.” Researchers on gender disparity in sports found that:

found that these students code certain sports as masculine or feminine, and do so along the same lines that researchers did in 1965. They found that “sports that emphasized overt displays of aggression or strength were typed as masculine, and non-contact sports that are either traditionally dominated by women (volleyball) or emphasize aesthetics (gymnastics) were typed as feminine.” And as teenage girls develop differently from their male peers—and begin to confront gendered expectations for how they ought to use their bodies—“teenage girls drop out of sports at a rate that is six times higher than that of boys.”

Motion for Preliminary Injunction Granted to 7th Grade Female Student to Join All-Male Wrestling Team.  Lawyers "were successful in obtaining a preliminary injunction requiring Line Mountain School District in Herndon, PA to allow seventh-grader Audriana Beattie to be part of the Line Mountain all-male wrestling program. Beattie has wrestled competitively, against boys and girls, since she was in third grade."