The NY Times features this special section on women's suffrage on the 100th Anniversary of Women's Suffrage: 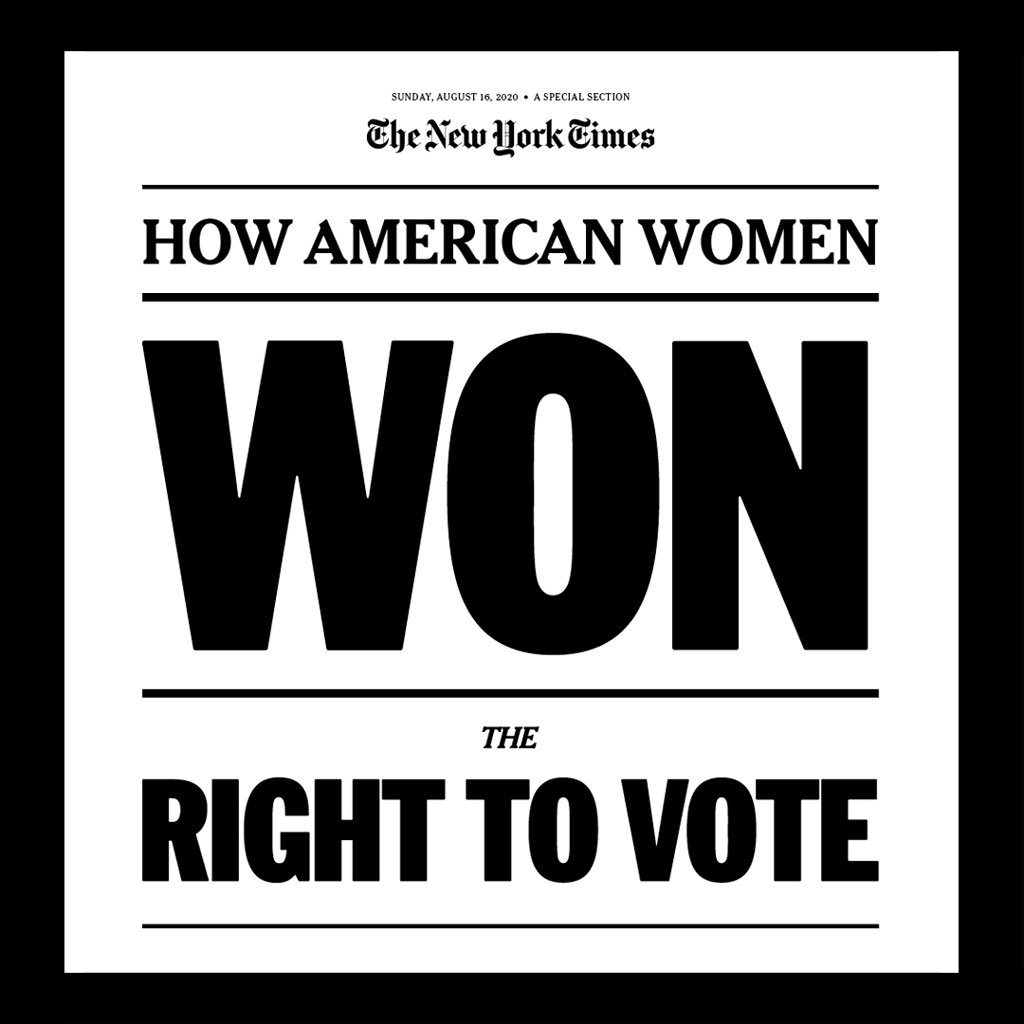 The 19th Amendment: An Important Milestone in an Unfinished Journey

Historians who specialize in voting rights and African-American women’s history have played a welcome and unusually public role in combating the myths that have long surrounded the women’s suffrage movement and the 19th Amendment, which celebrates its 100th anniversary on Tuesday.

In the lead-up to this centennial, these same campaigning historians have warned against celebrations and proposed monuments to the suffrage movement that seemed destined to render invisible the contributions of African-American women like Frances Ellen Watkins Harper, Mary Church Terrell, Sojourner Truth and Ida B. Wells — all of whom played heroic roles in the late 19th- and early 20th-century struggles for women’s rights and universal human rights. In addition to speaking up for Black women of the past, these scholars have performed a vital public service by debunking the most pernicious falsehood about the 19th Amendment: that it concluded a century-long battle for equality by guaranteeing women the right to vote.

Americans who imbibed this fiction in civics classes are caught off guard when they hear the more complicated truth — that millions of women had won voting rights before the 19th Amendment was ratified, and millions more remained shut out of the polls after ratification. Indeed, as middle-class white women celebrated ratification by parading through the streets, African-American women in the Jim Crow South who had worked diligently for women’s rights found themselves shut out of the ballot box for another half century — and abandoned by white suffragists who declared their mission accomplished the moment middle-class white women achieved the franchise.

As the distinguished historian Nancy Hewitt has shown, a lengthy campaign and a range of subsequent laws was required to fully open ballot access to others, including Black women, Mexican-Americans, Native Americans, Chinese-Americans and Korean-Americans. Among those necessary laws were the repeal of the Chinese Exclusion Act in 1943 and the adoption of the Immigration and Nationality Act of 1952, the 24th Amendment in 1964 and the Voting Rights Act in 1965, along with its amendments of 1970 and 1975. In other words, the 19th Amendment was one step in a long, racially fraught battle for voting rights that seemed secure a few decades ago but face a grave threat today.

Martha Jones, Tackling a Century-Old Mystery: Did my Grandmother Vote?

Sarah Elizabeth Lewis, For Black Suffragists, the Lens Was a Mighty Sword

Meet the Brave, but Overlooked Women of Color Who Fought for the Vote

Cathleen Cahill & Sarah Deer, In 1920, Native Women Sought the Vote: Here's What was Next